ABC News’ Kimberly Launier was on assignment in New Hampshire when this mysterious photo op presented itself. Launier was filming footage for a 20/20 report on fallen soldier Justin Rollins and his dog Hero when an inexplicable phenomenon occurred. She tells ABC:

At one point, Hero wandered off and took a stroll in the backyard. All of a sudden, the clouds broke and a light began to solidify in a beam directly down on Hero — a kind of vertical halo. As this dramatic ray of light was shining on Hero she turned to look at me, and it was all I could do to hold the camera steady and not drop it in astonishment. It was an unforgettable moment, and made me wonder if in fact Justin was in there. Then the light vanished.” 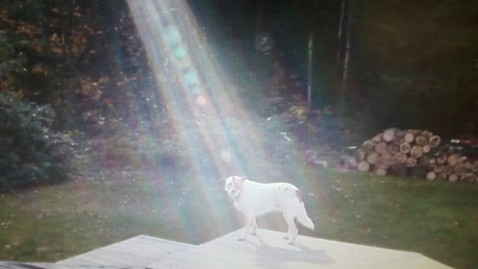