Dennis was found by someone after being abandoned under a bridge and left to die.  The poor dog was so sick, and barely able to fend for himself at all.

“Dennis was abandoned on a bridge and was left to die. When a young man, Gabriel Sepulveda passed by on his skateboard, he saw Dennis and remembered watching the Hope For Paws video of Jordan, so he knew to call us.  It took Lisa Chiarelli and I two hours to get to the location, and what we saw was horrifying. Dennis was on the ground, unable to move, and was covered with ticks.  We picked him up, rushed to the hospital, and we started the process of taking all the ticks off and cleaning him up.  While doing that, we rushed Lisa’s dog (Lola) to the hospital so she could donate blood for Dennis as he suffered from severe anemia.  For the next 5 days Dennis was seen by neurologists, cardiologists, and internal medicine specialists, but all of this was not enough… Dennis was too far gone, and his body was shutting down.  Not all rescues have happy endings… it’s important to understand that!  Dennis was neglected somewhere for a long time, and no one spoke for him. If you see an animal in need, please say something… do something.  Please share so people will know to take action next time they see a case of neglect or abuse. 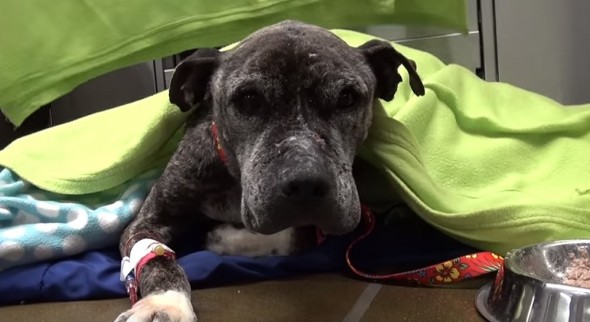