Gotti is a pit bull, and is proving once again that all a pit bull ever wants is love.  Upon seeing a deer caught in his human’s fence in their backyard, Gotti sprang into action alerting his humans of the situation.  Gotti then stayed with the frightened deer, covering it in kisses.

Gotti’s human came to the spot where the deer was tangled up and eventually got the deer free of the fence.  Gotti still stayed with the deer every step of the way.

When the deer was finally released, it then refused to leave Gotti!  The dog had done so well comforting the deer, it appeared the deer wanted to stay in the backyard with her new doggie buddy.  Animal control had to be called in to relocate the deer to a safer area.

Gotti is living proof that these dogs are a much misunderstood breed.  They are in no way “naturally” violent dogs, but products of violent humans.  All pit bulls ever want to do, is please their humans, and be loved.  Is that so wrong? 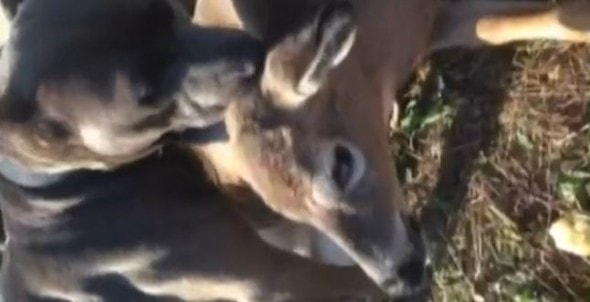