Hades, a pit bull from Oregon City, Oregon, saved his young owner Jesse-Cole Shaver after a swarm of bees stung him more than 20 times. 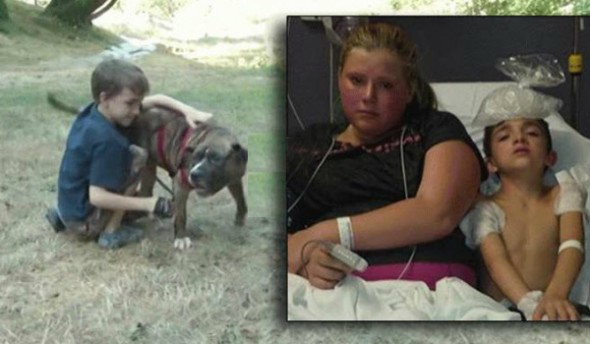 Eight-year-old Shaver, his sister Jasmine and other children from their apartment complex were exploring the woodsy area behind their building. One of the children stepped on an old wood log where the bees were nesting and due to the log’s old and rotten state and the child’s weight, the trunk broke apart, releasing the frightened and attacking bees.

Jasmine is allergic to bees, and was stung five times, but two injections from an EpiPen saved her life by stopping the deadly allergic reaction.

“It felt like a bunch of needles went into my skin, and I didn’t know what was going on until the girl started yelling, ‘Bees!’,” Jasmine told WKRC.

Jesse-Cole wasn’t able to run away from the bees in time. He was stung at least 24 times. Suffering from excruciating pain, the young boy couldn’t make it on his own up the hill, but luckily, his pit bull Hades was nearby and rushed to help.

“Hades saw me and came and she dragged me up to the grass and then stopped and let me crawl on her back and then took me to mom,” Jesse-Cole said.

Shaver’s mother heard the commotion and then saw her pit bull dragging the young boy to safety. The eight-year-old and the other children were rushed to the hospital, where doctors pulled more bees out of the children’s hair.

Hades was stung by the bees, too, but she was checked by a veterinarian and released home.

Jesse-Cole and his heroic dog are back home now and both are doing just fine.