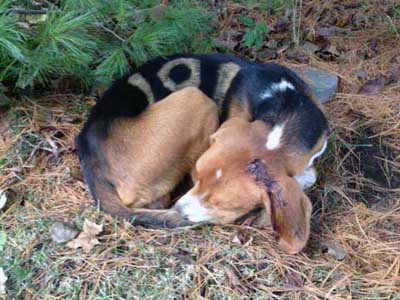 Police found a dog near death in Aurora, Ontario and are looking for help to identify the person or people who mistreated it.  The dog was found last Sunday at about 12:45 p.m.curled up in a ball under a tree, suffering from serious head injuries.  On top of that, the dog had been branded, apparently using some type of chemical agent, with the numbers 191 on both sides of its body.

Such an act of cruelty toward an innocent and defenceless animal is unthinkable and authorities want to find the perpetrator.  Constable  Netashia McLellan of York Regional Police found the dog while on patrol and called the OSPCA who rushed it to a veterinary clinic in Richmond Hill for emergency surgery for its wounds.  In addition to it’s head injury, it is blind in one eye and is now in the care of the Ontario SPCA.

Officer McLellan is credited with saving the dogs life.  She found it on Offord Crescent, near Bayview Avenue and Bloomington Road East.  Police and the OSCPA are investigating and are appealing for the dog’s owner and any witnesses to come forward, as they try to determine how the wounds were inflicted. Both McLelland and the dog, who is recovering, attended a press conference this morning related to the ongoing investigation.