Pet owners in the Harrisburg, PA area are being urged to keep their animals secure after a disturbing police memo from Police Captain Annette Books was published in the Philly Inquirer. 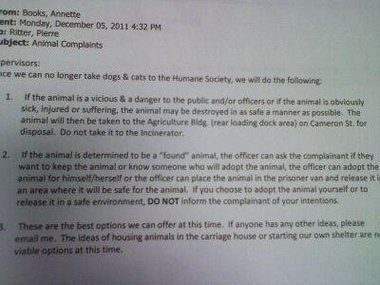 Because the city of Harrisburg has not yet renewed its animal control contract, the police department has come up with its own solutions for dealing with strays. In a memo obtained by the Inquirer, Harrisburg Police Capt. Annette Books authorized the shooting of animals deemed unhealthy or threatening.

If the animal is vicious and a danger to the public and/or officers, or if the animal is obviously sick, injured or suffering the animal may be destroyed in as safe a manner as possible. The animal will then be taken to the Agriculture Bldg. (near the loading dock area) on Cameron St. for disposal.

Animals who survive that critical screening process are not in the clear – in fact, if the officers are unable to adopt the animals themselves, or locate a potential adopter, Capt. Books suggests dumping them in a remote location.

A member of the Governor’s Dog Law Advisory Board has made it clear that abandonment of animals violates the state’s existing cruelty laws, and that releasing domestic animals into the wild is against PA game laws.

A city spokesman has said that it’s unlikely the city will renew its contract until February. With that in mind, for the next few weeks, area residents should be vigilant in their efforts keep pets contained and safe – it could be a matter of life and death.

Kris Baker, a Harrisburg resident and volunteer for the Central Pennsylvania Animal Alliance, says the rescue group is inundated with unwanted animals as area non-profits scramble to pick up strays before they are killed or dumped in remote locations. “We are in a crisis here in the capital city of Pennsylvania,” she said.

Fearing for the safety of her own pets should they escape for any reason, Baker has started a Facebook petition campaign to Stop the Shooting of Dogs in Harrisburg. Learn more at: http://apps.facebook.com/petitions/4/stop-the-shooting-of-stray-dogs-in-harrisburg-pa/.

One of the most troubling aspects of the aforementioned memo is not the actual authorization to use deadly force, or the suggestions to ‘creatively rehome’ strays. Captain Books goes on to suggest that officers should lie to those who report missing animals:

If you choose to adopt the animal yourself or release it in a safe environment, DO NOT inform the complainant of your intentions.