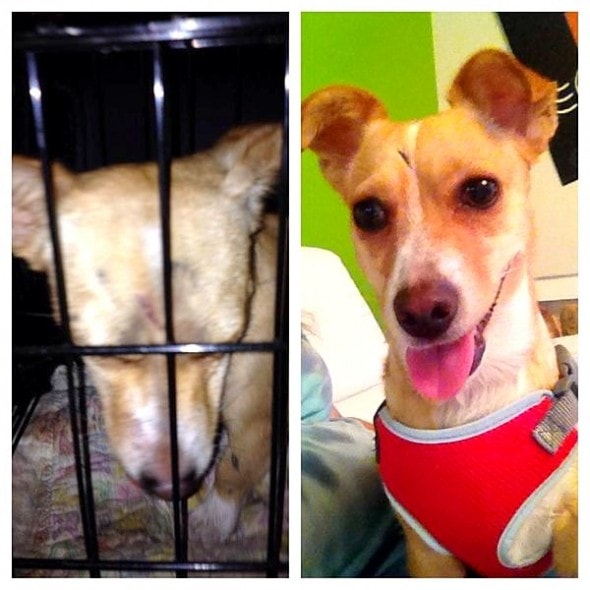 We are all fairly familiar with the phrase love happens when you least expect it.  It’s a phrase used by many people in many different ways over time.  For this couple, a simple trip to a grocery store just fifteen minutes before closing time, brought some much needed Karma in their lives, and an unexpected addition to the family.

My husband and I stopped at the grocery store, at 10:45pm – 15 minutes before it closed. While we were there, someone in a car dumped a dog in a cage in front of the doors. When we came out, people were staring at the cage, debating what to do. We decided to take her home and see if we could call a rescue the next morning, since we already had three dogs.

Once home, we realized something was wrong. She had multiple abrasions, was dazed, wasn’t moving her jaw, was panting and anxious and bleeding from her mouth. We rushed her to the emergency vet who said she had been hit by a car and she had a broken jaw and head trauma. He said the prognosis was poor and her care would be costly. We decided to give her a chance and do the x rays for a further diagnosis. When I pulled out my credit card and paid her bills, that was the moment that I knew that she was ours.

We arrived home at 3:00am and went back at 8:00am to take her to the Veterinary Specialist for surgery. When we got to the Specialist, he confirmed that her jaw was broken, but was primarily worried about her head trauma and said she was blind from her brain swelling. For 8 days she was an admitted patient. Her prognosis was touch and go, but they never did surgery because her jaw was stable and they didn’t want to risk anesthesia with the head injury. Several times we were told that they weren’t sure of the outcome, but slowly she got better. We eventually took her home and nursed her back to health. Her sight returned as her brain swelling diminished and she became one of our pack.

She is a sweet and happy dog who loves food and playing with our other dogs. She trots around with her tail held high and whenever we see her, we laugh about how we didn’t want another dog, but the universe gave us one, so we called her Karma.