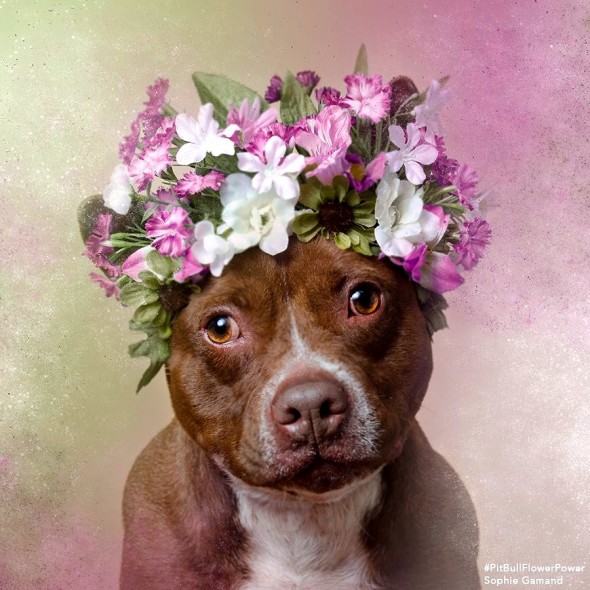 Brownie had been at a shelter for two years, and was slowly beginning to deteriorate.  She was the longest resident at the Town of Hempstead Animal Shelter, and desperately needed to get out.  Thanks to an article by The Examiner, she found her knight in shining armor.

From the Town of Hempstead Animal Shelter:

The wait is over, here is the first of our beautiful dogs to join the #pitbullflowerpower series by Sophie Gamand. We decided to post this one first, because it is the most urgent… Please read to the end.

For 25 long, excruciating, lonely, stressful months, our girl Brownie has endured life inside the walls of our shelter. Brownie, who is just shy of 3 years old (and a petite 40 pounds), has not only spent the majority of her life here, but is also our LONGEST resident in the entire building. Out of approximately 140 dogs, this girl has sat and waited the longest out of anyone else. As she grew up inside our kennel, she watched as dogs came and left, getting adopted into loving homes, while she sat and waited, and frankly, deteriorated. Two years is too long for any animal to be caged, but it has really taken its toll on Brownie and we need her to get out of the shelter before she deteriorates further.

Due to Brownie’s length of stay with us, her deterioration here, and her unhappiness about being locked up most of her life, to be honest, she doesn’t look good in the cage (But can you blame her?). What Brownie needs is someone willing to overlook her cage behavior, and come to meet her OUT of the cage. Let Brownie show you who she can be, let Brownie win you over with her soulful eyes, playfulness with other dogs, and her inspiring determination to get through this time in her life and make it to happier days. She knows there is someone out there for her, but it is our responsibility to find that person. Brownie has waited long enough, and her time is coming to an end. Her time is NOW to get OUT of the shelter and into a loving home – for her own well-being and sanity, we can’t let her sit here another day. 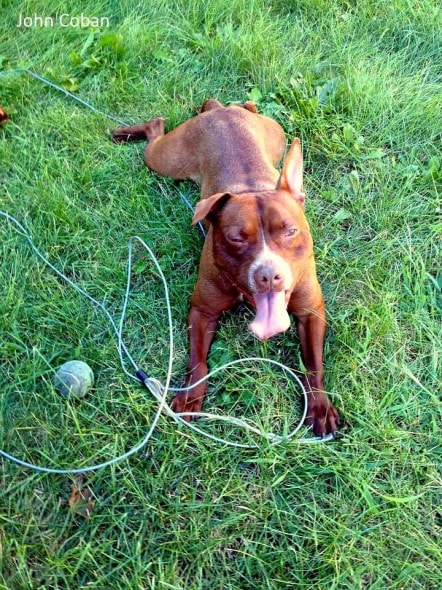 Her hero responded to The Examiner’s article:

Hello.  EVERYONE! I hope someone sees this. My name is John Coban and I just came back from the town of Hempstead Animal Shelter and met with Brownie. I filled out the application to foster her in my home. I had just lost my beloved black Lab four weeks ago and I am heartbroken. I’ve been seeing all these posts and articles on Brownie and decided I needed to do something. So now I am waiting to see if I am approved.

Upon meeting Brownie, I noticed she’s a little skittish and growled at me a little. This kind of thing didn’t bother me. Being locked in a kennel for over two years would do that. Brownie is not big at all but looks healthy. She didn’t pay too much attention to me, being outside and smelling the grass and getting a bit of fresh air. No problem! I have two cats at home and was told Brownie seems okay with cats as well as dogs, but if approved I will take precautions, as well. 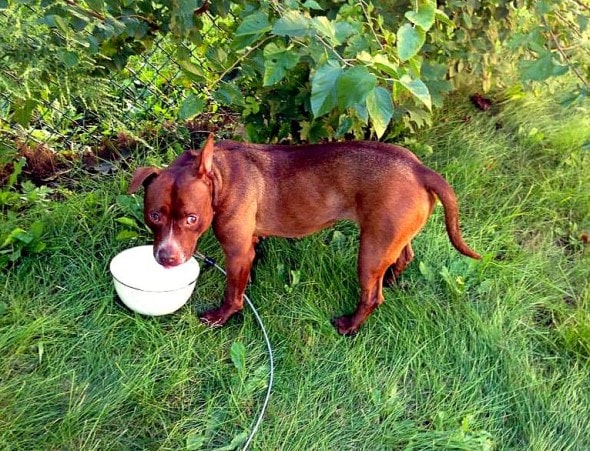 The two main reasons I am posting this message is one, I want to let all those concerned about Brownie’s welfare that there is hope. Secondly, I had noticed that some people who posted, expressed a willingness to donate towards Brownie’s foster. If I do get approved, would anyone out there be willing to help with that? At the present moment, I’ve been unemployed for a year now and I also just lost my long time renter, who moved out. I am now doing eBay selling and hustling, but things are tight.

I want to make fully sure I can take care of Brownie without any financial distress. I feel crappy even asking for help but this is my situation. Nor am I looking to get rich or have a great time on other’s hard earned wages. Money means nothing to me other than its necessary to survive. So, with that said, I’m trying to gauge if there is a kind-hearted soul who can help. If not, it won’t deter me from helping Brownie. I will do the best I can on my own. Also, feel free to share this and/or inbox me. I will respond to ALL who do. Right now I am just waiting word and I will post as soon as I hear back from the shelter. Thank you all and let’s pray I get approved. Be well, everyone. 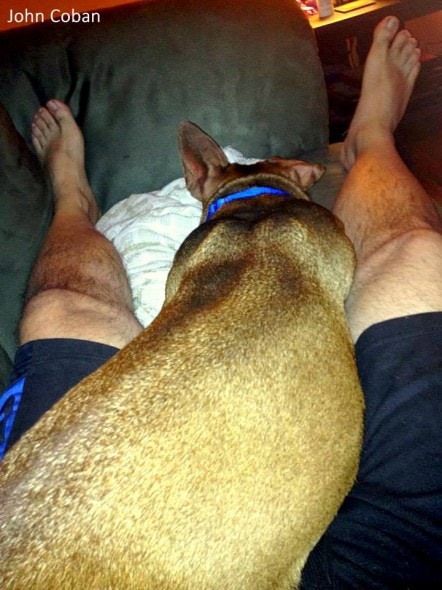 UPDATE ON BROWNIE, THE DOG, THE LONG-TIME RESIDENT OF THE TOWN OF HEMPSTEAD SHELTER:

Hello, Everyone, my name is John Coban and I have terrific news regarding Brownie, the Town of Hempstead Animal Shelter dog that HAD been in her kennel cage for over 26 months and who hundreds of people inquired and commented about. BROWNIE IS NO LONGER THERE! Despite having lost my beloved dog, Mecca, just five weeks ago, who I am still grieving for on a daily basis and will be for a very long time, I began seeing posts from various rescue groups and even the online newspaper, The Examiner, regarding Brownie, who NO ONE was taking a chance on.

Out of over 140 animals at The Town of Hempstead Animal Shelter, Brownie was there the longest. I was told she displayed growling in her cage and I suppose that was one of the reasons she was passed by. Well, being stuck in a cage for that long would do that to any animal or human for that matter. I said to hell with this, I had to do something, so I did. I went down to TOHAS and filled out the application to foster her. Right at this very moment, as I write this message, Brownie is NOW in my backyard on a nice, soft blanket and pillow, chilling and relaxing, while the warm sun bathes her brown coat. I’ve had Brownie now for four days and she is nothing but pure joy and happiness, quick to give licks and love and unfettered affection.

For the life of me, I just can’t understand why no one took a chance on this beautiful creature. I’m glad I did. As I had posted earlier, I have been out of work for over a year now and despite being a proud soul, I would like to see if anyone would be willing to donate or make a real monetary pledge towards Brownie’s future care? Many people who commented on Brownie, messaged they would help donate to her foster. Well, I suppose now that is me. I’m not looking to get rich on this but having just lost my dog, Mecca and being out of work for so long and being a homeowner in Nassau County, the most expensive county on earth, I know all too well how costly it is to feed, house and doctor these gifts from God. If anyone is willing, my PayPal account is [email protected] You can also inbox me on my Facebook page. Anything you can give would be greatly appreciated. Recent pictures of Brownie can also be viewed on my Facebook page, as well. Whoever sees this, please SHARE with EVERYONE. Thank you, again for your concern, regarding Brownie (She’s in terrific hands) and God bless to all animals and the humans who protect them….. 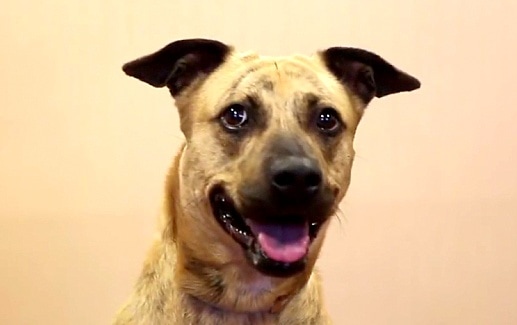 Petrinha is now Hempstead’s current longest member.  This cutie is four years old and has spent half of her life in a shelter.  Give her a home today!  Click here for more info or call 516-785-5220.