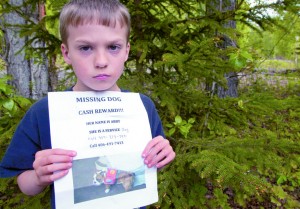 A distraught family is pleading for the return of their 8-year-old son’s stolen service dog. Abby, an 18-month-old English bulldog, disappeared from her family’s yard without a trace on the afternoon of May 23.

Judy Reinhart said her autistic son Wyatt has been devastated by the loss of his companion. Abby eases his anxiety in public and without that support, Wyatt is lost.

“She helps him focus and be calm,” she said. “When we go out in public, he gets really upset because there’s too much input and he just goes off. She stops that and he can go out.”

Wyatt and Abby were playing in the front yard at the family’s Wasilla, Alaska home on Wednesday afternoon when Wyatt went inside to get something. When the family went back outside out a few minutes later, Abby had disappeared. A neighbor witnessed a tan-colored Bronco-style truck in the Reinhart’s driveway near that time, but did not actually see anyone take the dog.

Since last week, Wyatt has been on edge, and his mother says he cannot begin to comprehend the circumstances of her disappearance. 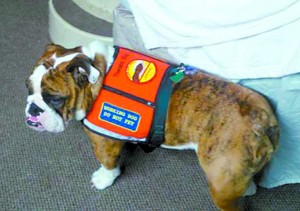 “He’s not eating and he’s trying to go out to look for her. It’s just devastating,” Judy said. “Now, he won’t eat, he wakes up in the night crying, he’s not sleeping well at all. He goes into these fits because he doesn’t understand why she’s not here. He wants us to just go get her and doesn’t understand someone took her.”

The Reinharts are asking that anyone with information about Abby’s disappearance contact them or call local police.