For a little lamb rejected by her mother, a dog will do.

“It’s amazing how animals start sharing,” said Dianne Shaw, who had something a little quirky to celebrate on Mother’s Day. Just north of Morris, she and her husband Ray have 16 sheep, 15 lambs, a donkey named Holly who herds them and two dogs. 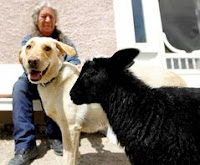 Sunny the golden retriever took Sheba the motherless lamb under her wing, Dianne said. When the little black-and-white lamb’s mother wouldn’t nurse her, Shaw started feeding the lamb special powdered milk. Their dog Sunny’s maternal instincts kicked in too, and she started producing milk. Now Sunny, who hasn’t had a litter of pups in more than two years, nurses Sheba the baby lamb.

Sheba follows Sunny around the farmyard. The friendly dog with the big droopy nipples stops for the baby lamb to snack. It’s heartwarming, says Ray, who sees the goodness in their menagerie of animals. “A lot of humans are rejected by their mothers,” he said. He hopes those kids find adults who care for and nurture them too.

From The Winnipeg Free Press