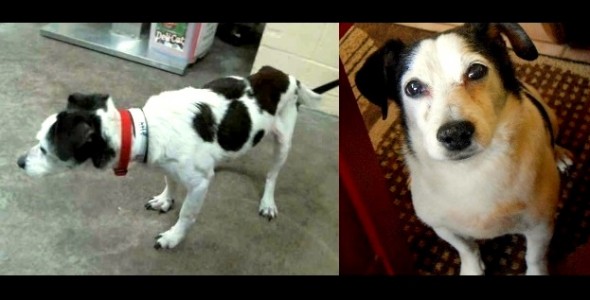 In mid-December 2013 I saw a photo of him. He was small, frail, and just skin and bones. The summary that accompanied the photo said he was 15 years old and owner surrendered. He looked so afraid, so disoriented, so alone.

Many people were typing positive comments of good wishes and prayers. I was going to join in and as I typed out how I hoped someone adopted this poor senior, the saying “I always thought someone should do something about that. Then I realized I was someone.” crossed my thoughts. I was HIS someone.

I jotted down his shelter ID number and drove to the Animal Services. I’ll never forget his brown eyes when I walked up to his kennel. He was so scared he wouldn’t even walk so the volunteer had to pick him up. He was unresponsive to my interaction, but I knew it was because he couldn’t figure out why he was there.

The volunteer shared the facts: he was old, owner relinquished, had dental issues, had hair loss, and was emaciated. He was on his third to last day before being considered for euthanasia because he was owner surrendered.

I could tell in her voice she was concerned because he wasn’t responding or interacting with me. She didn’t know I’d already made up my mind when I saw his brown eyes – there was a connection. I was going to be his someone. He wasn’t going to afraid at the end of his life; he wasn’t going to be alone.

During the past eight months Maddon has gone from an emaciated dog (body score: 1) who could not control his bladder (he had to wear diapers for the first month) to a full bodied, happy, diaper-less dog who literally does a heel click when he’s taking the single step down to the living room. It’s his happy dance!