A cruel prank carried out by a teen in the Philippines has raised the hackles of animal lovers from around the globe, drawing fire from advocacy groups and prompting a coordinated multi-agency manhunt.

Jerzon Senador posted the above picture of his puppy on Facebook, saying that he decided to try hanging his dog on a clothesline because he was bored. The teen boasted that there was no way he would get into trouble for just “washing his dog.”

When animal lovers on Facebook saw Senador’s photo of the dog dangling in his back yard from five clothespins attached to its coat they were outraged: local animal rights groups were contacted, and the story made national television news in the Philippines. After the television appearance sparked a wave of criticism and threats, Senador decided take down the pictures. He posted an apology shortly thereafter. ‘To all animal lovers and to people all over the world please read this,’ he wrote.

‘I would like to ask for forgiveness for the wrong I’ve done against my dog. I hope you could forgive me and I promise it will never happen again.’ 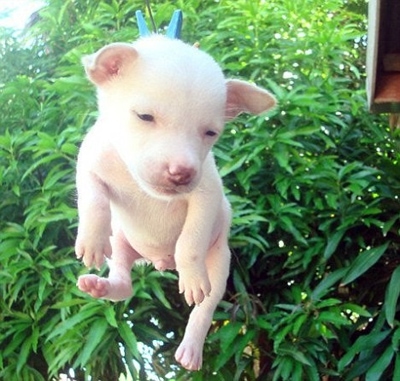 Reactions to his apology have been lukewarm at best, and many are still demanding justice, including the members of a new page on Facebook called ‘Jerzon Senador The Animal Abuser’.

‘Forgive? Never,’ wrote Melvin John Girado, who warned Senador that he was being hunted down by his college fraternity brothers.

The story caught the attention of the PETA, and the organization says it plans to investigate the matter. “We hope that Philippine prosecutors will take action and prosecute this young man,” said Peta legal officer Agnes Tam. “This is not child’s play, this is blatant animal cruelty.”

PETA, local police and other animal rights groups have collectively joined the hunt for Senador. According to his Facebook page, the teen is located in a suburb south of Manila. In the Philippines, cruelty to animals is punishable by up to two years in jail. Just last month a local student was fined £28 and given two months of community service for killing a cat.
.