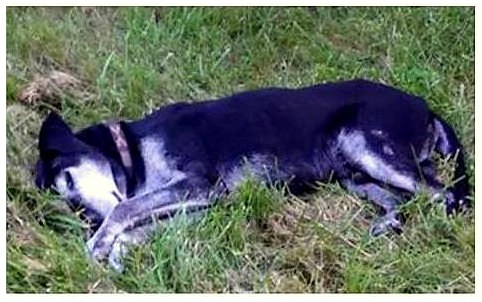 This comes from the dedicated folks at Trio Animal Foundation in Chicago.  On September 26th, this is what they posted:

Wallace was found as a stray by a wonderful Chicago police officer named Tammy. Tammy is also the police officer that found Halo (more about Halo another time). She is pretty amazing and went above and beyond to save both dogs.

Wallace’s medical team estimates he is 12-13 years old. He has large growths on several locations over his body. This includes a perianal tumor which is likely the result of high testosterone levels from not being neutered. He has muscle atrophy consistent with aging. He is thin. His eye was infected from a large upper eyelid growth that is scratching his eye, which is covered in thick, goopy discharge. He had open wounds on one of his rear legs with draining tracts. His spleen was enlarged via palpation during his physical exam. His ears are filthy and inflamed. He has diarrhea.

In order to be sure we knew exactly what we were dealing with, we authorized a myriad of tests:

-Fine needle aspirate of the 4 major growths: one under his neck, one on the back of his leg, one on the side of his leg and one on his side.
-Culture of the draining fluid from the open wounds on his other rear leg
-X-rays of his chest and abdomen
-Full blood panel
-Eye staining
-Ear cytology
-Fecal test
-Urinalysis

We have received the results from many of the tests:
-His vet was concerned he might have blastomycosis and wanted to send off a blood test to help aid his diagnosis. Blastomycosis is a systemic fungal infection. The most common sites of clinically apparent infection in dogs include the lungs, lymph nodes, eyes, skin, and bone. Fortunately the test for blastomycosis was negative.
-Bloodwork was mostly normal, with an increase in white blood cells consistent with infection.
-Heartworm test: positive
-X-rays showed his spleen was enlarged, but there were no obvious masses anywhere else in his body. His heart shows no sign of physiological changes from heartworm disease.
-Fine needle aspirates showed several of the growths were inflamed lymph nodes. He has no signs of lymphoma or other cancer, which leads us to believe the inflammation of his spleen and lymph nodes are due to the overall infection his system is fighting.
-Antibiotics for open wounds started. After 3 days there was no improvement so a stronger antibiotic was started.
-Eye stain was negative for corneal ulcers so drops were started with plans to remove the growth.
-Urinalysis was clear minus some white blood cells. He is drinking and urinating a significant amount.
-Ear cytology showed a significant yeast infection in his ears and they were cleaned and treated.
-His fecal was negative so he was started on probiotics to help restore the natural flora in his gut. 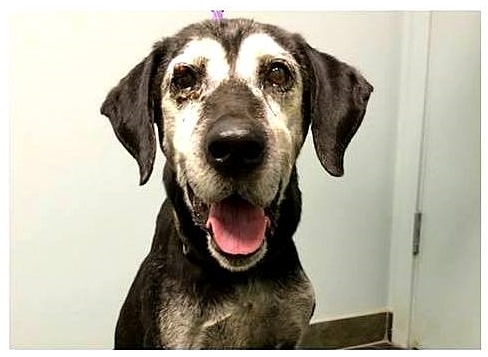 Friday Wallace underwent surgery to be neutered and have the eye growth removed. He recovered easily. Now that Wallace is neutered, the perianal tumor should diminish in size. He has been on strong antibiotics now for 4 days and there is significant improvement in the wounds on his legs, his increased drinking/urinating, and his eye is no longer infected. His ears are clean and less inflamed. Overall, Wallace is doing very well. He will remain hospitalized until we can recheck his bloodwork later this week to ensure his infections have cleared up. We will also come up with a game plan to treat his heartworm disease once the other issues have been resolved.

On October 4th they shared an update with supporters:

Amazing news… the Chicago police officer who found Wallace on the side of the road has adopted him!

When 12-13 year old Wallace came into TAF’s care he was an absolute mess and needed to be hospitalized for 2 weeks. In that time he underwent a multitude of tests, treatments and even surgery to keep him comfortable for the twilight time that Wallace has left with his mom.

When Tammy arrived to pick up her buddy Wallace, he walked over and buried his face in her arms. It was obvious that he remembered the kindness she showed him when he was not feeling well and all alone. He wouldn’t leave her side, and as they walked out the door, we swore there was a spring in his step!

Officer Tammy… thank you so much for all that you do to help the homeless dogs in the city of Chicago! 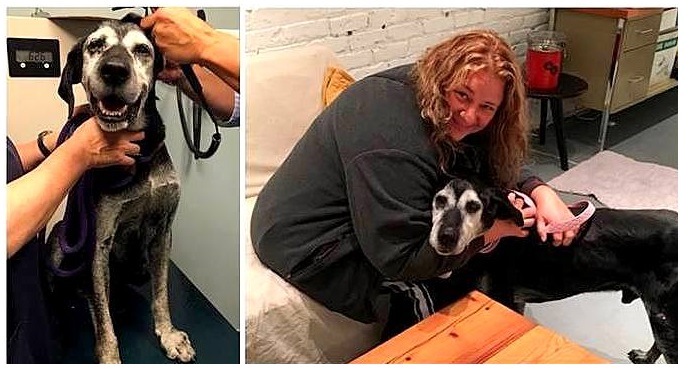