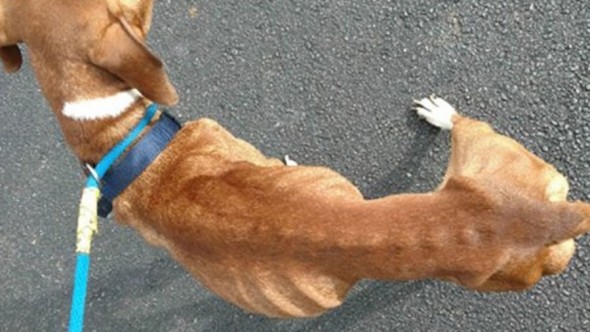 A couple from Hamilton, Ohio has been charged with felony animal cruelty charges after their dog was found starving and nearly dead.  Duke, as he is called, was found at about 3PM on Monday by a night manager at Minnick’s Drive-Thru searching for food.

Jennifer Richey was the one to find Duke, and she said, “I was sick to my stomach.  I couldn’t believe that somebody has a pet and just totally neglects it like that.  Like, your dog is a part of your family!”

Richie says she spotted the dog, recognized that he needed help urgently, and called to him to come over.  Once he got closer to her, she could really tell just how bad he’d been suffering.  Once she had Duke, she call the police to assist.

“I was disturbed by the condition this animal was in. I have seen a lot of animals in a poor state due to lack of care, but I don’t know how this one was still alive,” said Deputy Warden Kurt Merbs.

Law enforcement got on to looking for Duke’s former humans, and they were found on Tuesday.  Jessica North and her fiancée Christopher Sears are each charged with cruelty to a companion animal, which is a felony. They were also hit with a misdemeanor of failure to license the dog, and depending on how the full investigation goes, there may be even more.

“This is one of the worst cases I have seen of neglect and cruelty,” said Butler County Sheriff Richard Jones.  “I will do whatever it takes to see that those responsible are held accountable for the condition this animal is in.”

As of September 13, House Bill 60 (nicknamed Goddard’s Law) took effect in the state of Ohio.  Basically, it takes all cases of animal cruelty and bumps them up to a felony with much stiffer penalties attached.  Anyone guilty of “serious physical harm” to a companion animal will be in much more serious trouble for a longer period of time.

“I want to crawl in a deep dark hole, I’m ashamed,” Jessica North said.  “I tried everything, and I didn’t know what else to do for him.  I’m not blaming this on anybody else, it was my fault and I get it.”

“I didn’t have the finances to do it, that’s what it boils down to and I’m not a bad person,” said North.

Duke is now in the care of the West Side Animal Clinic by Doctor Sara Horton.  She estimates that Duke is a beagle terrier mix, and is around six or seven years old.  His ribs and spine were protruding seriously, and it’s estimated that he’s at about 50% of the weight he should be.

“This is probably the worst case I’ve ever seen, and to know that somebody would intentionally starve this dog, it just horrified me,” Dr. Horton said.  “What gives them the right to do this to another being who doesn’t have a voice?  He doesn’t have a choice.”

Donations have been coming in like mad for Duke, and there are a lot of people pulling for him.  He is expected to make a full recovery, and hopefully will find himself adopted out to some people that will actually be capable of caring for him the right way.  Surrendering your dog is never an easy thing to do, or a happy thing.  However, consider the fact that they are COMPLETELY in your care, and if you can’t meet their needs, maybe another loving family can.  Isn’t that what our best friends and companions really deserve?  A good, loving forever family that will love and keep them forever.