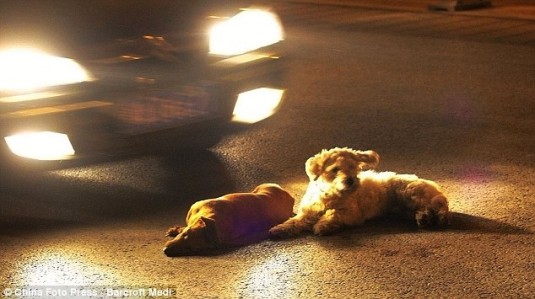 Dogs are noted for their loyalty to their owners, but a dog in China has demonstrated extreme dedication to a four-legged friend.

On the Dazhi road in China, where his companion has been knocked down by a car, vehicles zoom past a dog who risks his own life to look after a fallen friend. With horns honking and other terrifying sights and sounds all around him, the yellow mutt stays put, standing guard over his buddy.

Earlier this week, the first dog was struck on the always busy Dazhi road when the pair managed to lose their sense of direction and wandered into oncoming traffic.

Guardian: As the cars speed by, the dog stands over his hit friend

Unfortunately, the injured dog died from his wounds, but thanks to the help of his loyal protector he was picked up by a passer-by, who gave him a proper burial.

Nothing is known of the brave, devoted dog who waited patiently by his side, although witnesses said he was not hit by a car – and ran off to safety once he saw the man carefully pick up his fallen mate.