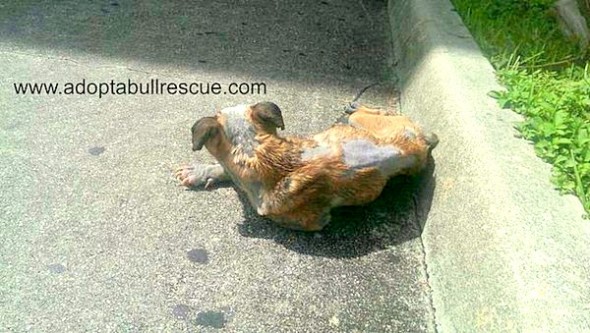 An English bulldog puppy badly suffering from starvation and demodex mange is on the road to recovery after a good Samaritan discovered her lying unconscious on a Florida street and took her to a shelter.  Now the dog, named Princess, is being lovingly healed up in a foster home.  See how much better she looks in her video!

Princess weighed only 19 pounds when she was found, and was so weakened by malnutrition that she could no longer stay conscious.  The man who found her rushed her to Adopt-a-Bull Rescue in Broward County.

“[She was] very lethargic, very weak… could not even walk across the floor,” a vet tech said.

She has a microchip, and it was determined that she had been purchased from a pet store in Doral, and then heartlessly returned because she had mange. 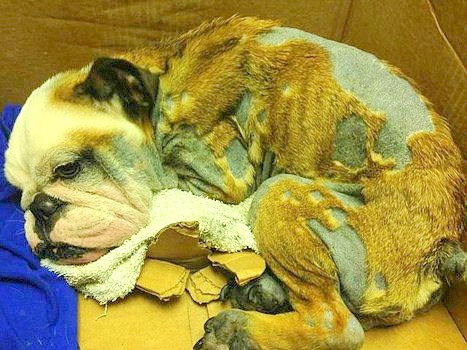 “THIS CASE SERVES AS A PROVEN EXAMPLE OF WHAT HAPPENS WHEN YOU BUY & RETURN A PUPPY FROM A PET STORE! From speaking with the previous owner further, we were able to obtain the name and phone number of the ‘saleswoman’ they returned Princess to,” said someone from Adopt-a-Bull.  “This ‘saleswoman’ happens to be the owner and operator of this pet store/puppy mill operation which is CURRENTLY STILL OPERATING! Princess did not have a single tick or even a flea on her which leads us to believe that she has not been on the streets for very long, if at all. We have strong suspicions that whoever has been harboring Princess has let her purposefully deteriorate to this condition before dumping her.”

Now Princess is being treated and is expected to make a complete recovery.  She has just been released from the hospital and is learning what it means to be loved in her new foster home.

It is hoped that as more information becomes available, an investigation will be launched.

See what just a little love can do!