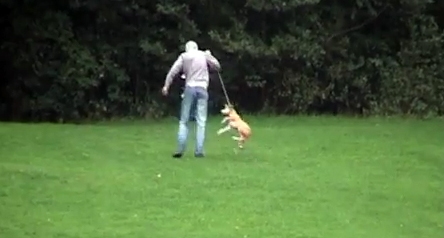 A positive development for those who have been following this troubling story.

A 24-year old man man is being interviewed by animal cruelty officers following an online video which showed a dog being repeatedly kicked. Footage of the incident, filmed in Knee Hill Park, Abbey Wood, appeared on YouTube and led to a public outcry.

It showed the dog being kicked, dragged up a hill and hoisted up by its neck.

The man, reported to be Arthur Kent from Welling, handed himself in at Bexleyheath police station on October 23 where he was arrested, interviewed and released without charge. A spokeswoman for animal cruelty charity the RSPCA, which has seized the dog, confirmed it was now interviewing someone in connection with the incident.

Many thanks to all of you who shared our post in the interest of justice and animal welfare. It took a little longer than expected, but as we have learned from previous incidents this year, collective efforts to identify abusers are working.