Ohio police are on the lookout for a dog bite victim after a woman’s four legged friend saved her from an unidentified attacker. The incident occurred Tuesday evening around 9 p.m. as 21-year-old Arlee Ice was walking her dog, Cash, near Broad Street and Concord Avenue in Elyria.

The pregnant woman told police that the male suspect took her by surprise, sneaking up behind her as she walked Cash with headphones on. He grabbed her shirt before she was even aware of his presence. Alarmed, she turned to face her attacker and grabbed her cell phone, telling him to get away before she called her husband, and warning the perpetrator that her dog would bite if he did not back down. 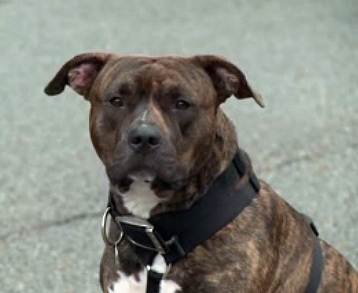 The man ignored her warning, grabbing the front of her shirt and pulling her closer to him, saying that he wasn’t afraid of her dog. When Ice yelled and tried to escape Cash sprung into action and pounced on the attacker. Ice said she watched as the dog bit him, knocking him to the ground. When the predator struggled to free himself the dog grabbed him firmly by the neck.

Battered by the loyal defender, the criminal backed down: Ice was able to pull Cash away from him and run before he could collect himself. Because it was dark, a thorough description of the suspect is not available, but police say they are seeking an African-American male in his late 20s or early 30s. He was wearing a sports jersey and long, dark shorts.