There seems to be an epidemic of law enforcement officers shooting pets in our nation. News reports are filled with unjustified shootings of dogs, and police officers simply say the dog in question posed a threat to their jobs and lives. It goes without saying that when a pet mauls a person or attacks, using lethal force to stop the pet is expected, but animal lovers across the nation cannot find it in their hearts to defend the Cleburne, Texas, officer seen in this video calling out a friendly dog, to just shoot him. 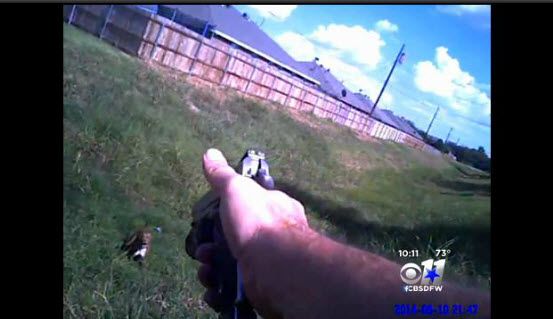 According to the police report, an officer responded to a 911 call from motorists stuck in a car on the 1500 block of Lindsey in Cleburne, Texas. The callers reported three snarling dogs preventing them from getting out.

The responding officer arrived on the scene and was able to secure one of the three dogs. While the officer attempted to secure the other dogs, Animal Control arrived and one of the remaining loose dogs became aggressive. That’s when the officer drew his weapon and shot the dog.

The officer was equipped with a body camera and when the owners of the deceased pet requested authorities to release the tape, a different perspective of what happened that day came to light.

On the video you can hear the officer, making kissing sounds calling the dogs to him. You can see when the dogs approach the officer in a friendly manner – their tails were wagging – and then the officer kills one of the dogs. The other dog ran away in fear.

Authorities released a statement saying the officer and the shooting are under investigation.
“The City is obviously concerned about the video showing an officer shooting a dog. As is often the case, the short video does not tell the whole story.

The City of Cleburne takes the safety of our residents, their pets, and our officers seriously. This incident is currently under review. The review will include interviews with witnesses and review of department policies. Once the review is concluded, any actions that may be warranted will be handled swiftly and appropriately.

The Cleburne Police Department is seeking the public’s help if anyone observed this incident; please contact the Professional Standards Unit at 817.556.8894.”

The officer has not been identified  but we hope the investigation leads to the right conclusion and justice prevails.