Owen Mahan is 10. He lives in Pittsboro, IN. And when he saw a video about ChiChi; you may remember a Dodo video we posted not long ago in which ChiChi was featured), he decided he’d like to meet her.

When Owen was 2, he fell into a bathtub of scalding hot water and suffered second- and third-degree burns over 98 percent of his body. His is a remarkable story (you can read more about him here). He came back from the horrible injuries in ways doctors thought he never would. He has inspired so many people, living life as joyously as he does. And more recently, he, too, like Chi Chi, became an amputee.

Mahan is doing very well on his prosthetics — and when he heard Chi Chi’s story after coming across a video of her online, he felt quite the kinship. He decided he wanted to meet her. 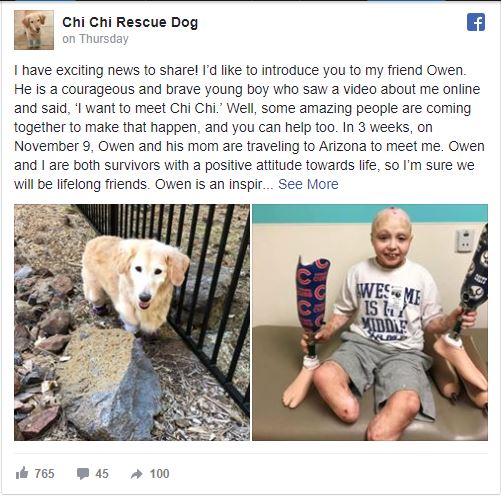 The best part? A surprise trip is planned — Chi Chi’s family is helping to coordinate it! — and you can help make the day even better.

“Owen is an inspiring 10-year-old boy who has overcome numerous challenges during his short life,” the post on Chi Chi Rescue Dog’s page reads.

“The trip to meet Chi Chi is a surprise for Owen, so if you know him, don’t mention this,” the post continues.

A GoFundMe page has been set up where you can contribute to help cover the cost of the trip. As of this morning, they were still shy of the goal, but according to the page, any additional funds that are raised will be given to Owen’s mother, Susan, to help with his ongoing needs.