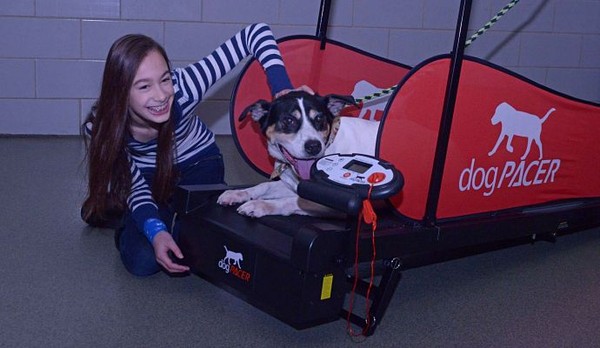 Kam Gottlieb is not like most 12-year-old girls, who spend their allowances on clothes, jewelry or candy.  The Wilmette, Illinois native has spent the past three years saving up to donate treadmills to animal shelters.  She has already donated two so far, and is working on raising funds for a third.

The sixth grader was inspired to help make a difference by a friend’s mom, who has spent time in Haiti helping earthquake disaster relief efforts.

“When she got back, she showed me some photos, and I was really interested,” Kam said.  “I knew I wanted to help, and there are a lot of things that need help.  I’ve always loved animals and decided I wanted to do something with shelter dogs.”

She also wanted to do something that would be “special and different.”  She learned that it can be difficult for shelter dogs to get enough exercise, especially in cold-weather areas in winter, when they are cooped up for much of the day.  Kam’s mother had heard that doggie treadmills were becoming popular, and that sparked her cause.

When in only the third grade, Kam made a PowerPoint presentation to show her class.  She had her mother get glow-in-the-dark rubber bracelets made, and she began raising funds.  She also held events, including a tiki party.  Everyone was asked to donate five dollars.  Attendees were generous and gave more than asked, which allowed her to raise over $150.

Treadmills run for about $1,000, and Kam was almost there.  But then she found out about the dogPACER treadmill, and was ecstatic to see that she already had enough.  What’s more, when the company found out what she was doing, felt so inspired that they decided to give her $100, free shipping and would match her donation by giving a second treadmill to the shelter of her choice.  She chose Michigan.

“We have a cabin there, and we always donate toys at the Humane Society there,” Kam said.  “I have a good start on my third treadmill; I’m not sure where I’m going to place that one.”

She’s already devised a new way to raise the money – holding a snowman-building contest and selling hot chocolate, and maybe a one-mile walk in the spring.

With all of Kam’s efforts, it’s easy to imagine this 12-year-old has grown up in the company of dogs.  But here’s the kicker – the Gottliebs don’t have a single pet.

“Everyone in my family but my mom has allergies,” Kam said.

They had a Poodle at one time, and are hoping to have dog again this spring.  In the meantime, Kam’s mom will have to settle with her new hobby of dog-grooming.

Kam has inspired her friends and family with her cause, but they aren’t the only ones to become emotional – staff at dogPACER were truly touched.

“We were completely blown away that this young lady was so committed to pets that she put such an effort into raising money,” said David Ezra, CEO and founder of dogPACER.  “We were honored that she chose our product to purchase.  Two of our employees got teary-eyed when they heard the story!”

The company initially wanted to give her a treadmill for free, but realized it would slight all of Kam’s fundraising efforts, so they decided to match her donation instead.

“She was so excited to be able to help another shelter!  That totally made our day,” Ezra said.  “Kam is an inspiration to all of us.”