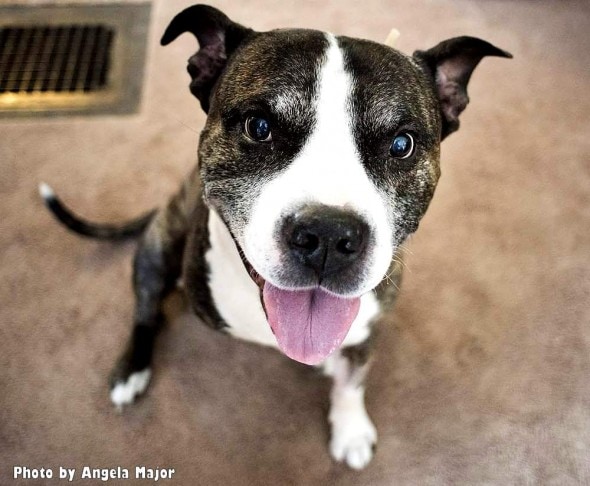 A small, 15-year-old dog missing a leg might not seem like much of a threat to most people, but this one showed that anyone threatening his family better think again.  Last week, Levi took a bullet for his family and saved them from a man who had entered their home and attempted to rob them.

“Levi is our hero,” Darcy Cherry explained to the Janesville Gazette.

Levi, a smiley sweetheart, is small for a pit bull.  But he has a big heart, and will defend his family to the death.

On January 19th, Darcy and her longtime boyfriend, Bob Stenzel, had forgotten to lock the back door of their Wisconsin home.  Around 6:15 PM, a masked man dressed in black barged in and ordered the couple to the floor.

“Where’s the safe?  Where’s the money?” the gunman repeatedly demanded.

But they told him there was no money or safe.  Darcy told the Gazette that they’re simple working people:  she’s a property manager for a landlord, and Bob is a handyman.  She said the fact that the man remained so calm was chilling.

“Where’s the weed?” he then asked. 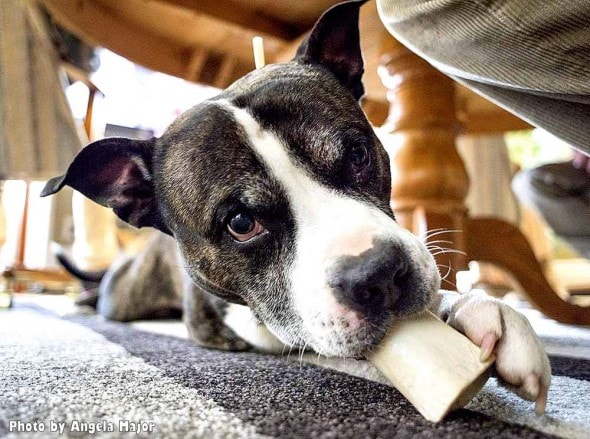 Darcy told him they didn’t have any of that, either.  At that moment, Levi, who had been in the dining room with them, stood up and began growling at the burglar.  Though he’s usually friendly with strangers, he doesn’t like violence and reacts defensively at the sight of toy guns.

She could hear in his voice that Levi was distressing him.  She and Bob called Levi to them, but he refused to listen.  The man fired at him and fled.

The bullet grazed the top of his head and became lodged in the thick skin of his neck.  Bob called 911, and police and Emergency Veterinary Service arrived quickly.

“They were so wonderful to Levi,” Darcy recalled.

She says they’ve had him since he was a puppy.  Friends found him abandoned in an apartment building.  Bob called and said, “Hey, I’m bringing home a pit bull!”

“No, you’re not,” Darcy told him, but the little guy quickly stole her heart.  It seems that everyone who meets him falls in love, and friends and family members often ask to take care of him. 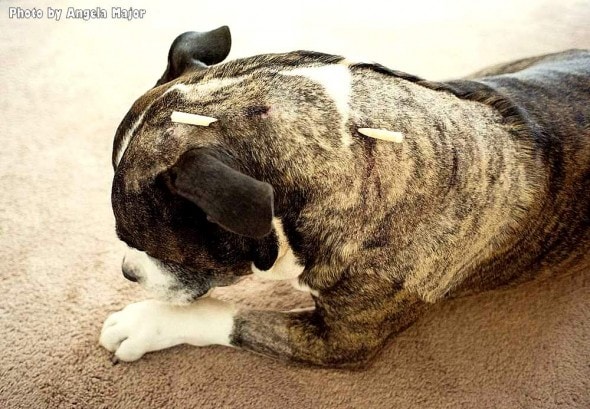 A drain tube has been inserted in Levi’s skin to prevent an infection from developing.

But Levi’s life has been full of nerve-wracking events.  About five years ago, he was dognapped in the middle of the day.  Thankfully a neighbor saw him being enticed into a van, and took down the license plate number.  Police found it and saved him that same day.

Then in June of 2014, the family was walking along the trails above the Devil’s Staircase in Riverside Park when Levi toppled over the side of a cliff.  Darcy firmly believes that Levi falling prevented her sons from inadvertently taking the same spill, so he has saved her family once before.

That horrific incident shattered the bones in his right front leg, causing amputation to be necessary.  But he’s a true survivor, and clearly loves his family.

Darcy is still incredibly shaken by the ordeal, and worries about the possibility of seeing him when she is outside of her home.

“It’s exhausting, having to live a normal life again… This guy knows who I am.”

“This guy’s got to get caught.  We’ve got to catch him,” Darcy stressed. 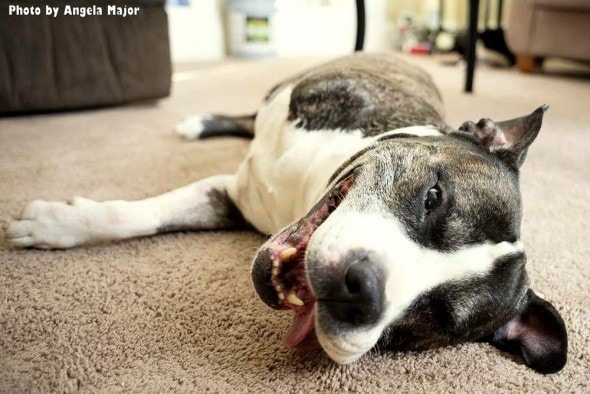