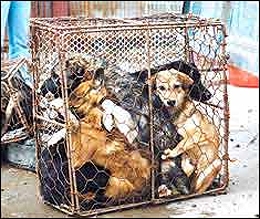 Yulin, China hosted a food festival a few weeks ago, and more than 15,000 dogs ended up on the menu.

Having earned a reputation for serving some of the most delicious dog dishes in the world, the festival drew sizable crowds as dog meat connoisseurs from near and far descended on the city to participate in festivities.

In an interview with the Daily Mail, Local Lu Hin said “It is just like other meat. Smaller animals tend to be more delicate and sweeter while very big dogs have a strong, muscular taste. We proved that when we started the festival a few years ago and everybody accepts that the best dog meat dishes come from Yulin. That was why we created the festival and the number of visitors we get is a testimony to the fact that everybody recognizes how good the dog meat is from the region.”

Consumption of dog meat is still a widely accepted practice in Guangdong province, home to a number of dog farms, where pups are often slaughtered in their first three to four months of life. Opponents of the dog meat trade are turning up the heat, however: due for legislative consideration in the spring is a proposed law that would outlaw animal cruelty, including the practice of beating dogs to death in order to enhance their flavor.