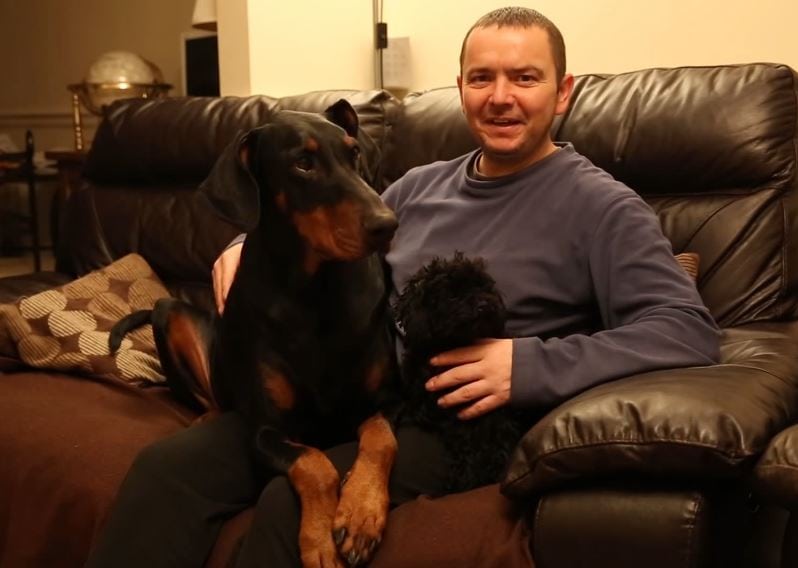 A truck driver who found an stray poodle eventually tracked down the owner – who said he could keep her because the dog had fallen in love with him.

Dean Parlett, 42, spotted Kiki the black puppy scavenging on Chessington Industrial Estate in Chessington, Greater London on July 27, 2014 and took pity on her. He’d just finished his delivery at Chessington and was headed back to Nottingham when he saw something in the road that he thought was a fox at first. He slowed down, realized it wasn’t a fox, got out of his truck and found Kiki.

Dean says Kiki was in pretty rough shape, with heavily matted fur hanging in clumps. He took off his sweater and wrapped the little pup in it, then went back to work. The pedigree dog was cold, hungry and riddled with fleas and Dean looked after her and would take her for trips in his truck cab.

He took the little rescued dog in to the vet to be checked over and scanned for a microchip. Kiki was chipped and her owner was located. It turned out the little dog had been missing for 6 months.

Dean kept Kiki for another week while she recovered and got her strength back, then he and his partner drove 300 miles to take her back to her owner, Patricia Telling, 75, of Hurst Park, Surrey.

Not long afterward, Patricia called and spoke with Dale’s partner, asking if the couple wanted to keep Kiki and give her a home. Dean says Kiki’s former owner couldn’t keep her because of age-related and other issues. SWNS news service says Patricia called Dean and his partner and said the dog was pining – and had obviously formed a “special bond” and he should keep her.

Dean and his partner traveled back down to London to pick Kiki up, and she has been with them ever since.

As we can see in the video below, Kiki appears to be very happy and settled into life with her new family.