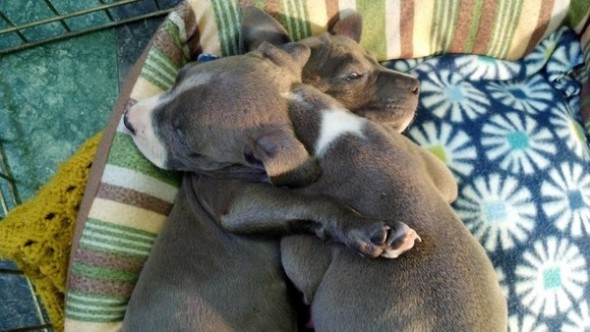 Railroad workers in Albany, NY came across three 3-week-old Pit Bull puppies that appeared to have been intentionally nailed to the tracks. The puppies were severely dehydrated and malnourished. The railroad workers brought the puppies to the Mohawk Hudson Humane Society where the three puppies received veterinary care.

In addition to being dehydrated and malnourished all three puppies had injuries to their back left paws. “One puppy had a hole through her paw, the other one the two middle digits of her rear left were removed, and a third, his entire left paw has been cut off,” The injuries suggest that the puppies were nailed to the railroad track.

Executive Director Brad Shear of the Mohawk Hudson Humane Society said. “When this was happening to the first puppy, I’m sure they were just screaming in horrific pain, and then this person did it again, and then they did it a third time. So anyone who would do that is just an incredibly sick person.”

It is obvious that this is an animal cruelty case, as there is no way the wounds suffered by the three puppies happened naturally. Although they are receiving the needed veterinary care, the puppies are not out of the woods. Unfortunately, the smallest of the three puppies passed away on Tuesday. The two surviving puppies likely will need more surgeries. They are expected to make it, but the one puppy will most likely lose his leg.

Shear is not only worried about the two puppies that are still recovering. He is concerned about the puppies’ mother who only gave birth to them a few weeks ago. Shear also believes that it is very likely there are other puppies from the same litter to be concerned about. It is very rare for a Pit Bull to only have three puppies in a litter, and more likely six or seven puppies were in that litter.