Carmen, a nine-year-old boxer, has recovered enough to go home with her human uncle after being pulled from the house fire that killed her dad.  When she was found, she was lying on top of her dad’s face, trying to shield him from the smoke and fire.

The heroine’s homecoming is bittersweet for Phil Ledford, whose brother’s life was tragically claimed by the February 5th fire that ravaged his Ohio house. 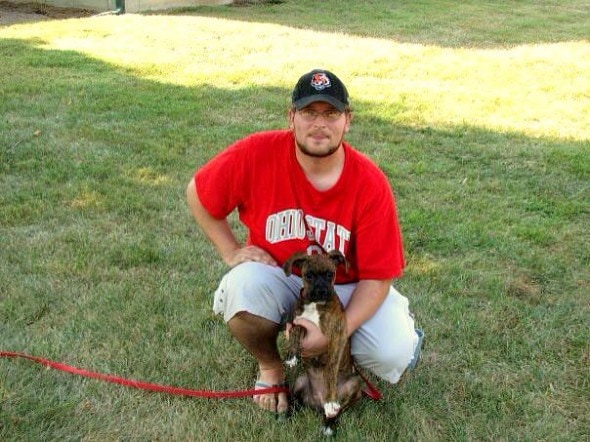 “It’ll be tough in that sense, seeing Carmen every day, because she will remind me of Ben,” Phil told CNN affiliate WCPO.  “But it’ll be like having a piece of him around.”

First responders said they found Carmen on top of Ben Ledford, blocking his face from the heat and smoke that were taking their toll on both of them.  Ben was taken to a hospital, where he later died.  Carmen was brought to Care Center Vets in Cincinnati. 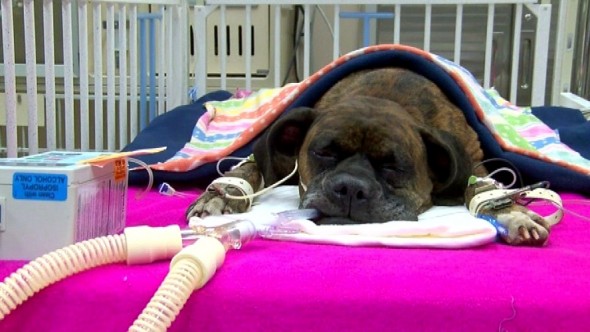 A fundraiser was launched and donations began pouring in for the medical treatment of this brave and loyal dog.  Over $29,000 has been sent in.

She was suffering from severe lung damage due to smoke inhalation, according to Dr. Daniel Carey.  She was kept sedated, but she responded well to the family’s visits.  They kept them short, however, so she could save up all her energy for physical therapy, which she needs to help her walk again. 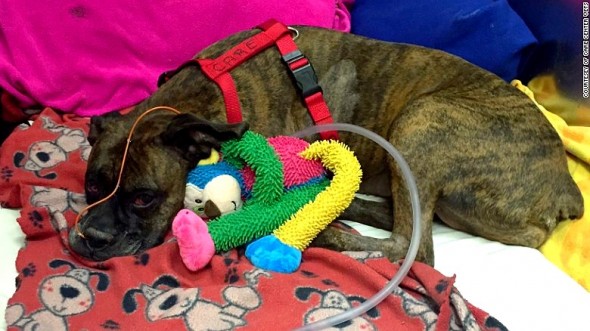 Over the weekend Carmen was taken off oxygen support and was eating on her own.  On Monday, Phil and family brought her home.

“We still cannot find the words to truly express how much we appreciate the support we’ve received from everyone for Ben, the family and for Carmen,” the fundraiser page says.  “If it hadn’t been for the vet who rescued Carmen, the Care Center and the support and donations from friends, family and pet lovers from around the world, we would not have been able to provide Carmen with the level of care that has allowed her to walk out of the hospital today.”

Now she is ready to adjust to life in her new home, but hopefully the transition won’t be too difficult because she is with family.  The staff at the Care Center will miss her greatly, but are happy she survived and will be moving on with her life in the care of a family who loves her very much.