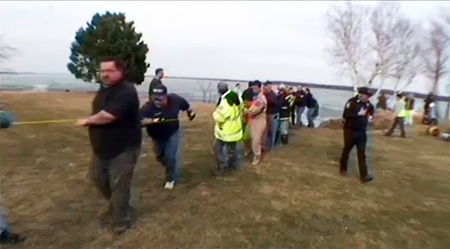 A dramatic local ice rescue that involved more than 50 first responders is drawing criticism from home and from afar, and we couldn’t be prouder.

Local news station WCAX recently ran a story titled A risky rescue to save a family pet, a piece about a Shrewsbury, VT dog named Panda who wandered dangerously far from the shores of Lake Champlain, becoming trapped on thin ice and requiring an impressive, coordinated rescue effort that produced the kind of happy ending we love to read about.  Sounds about perfect, considering the circumstances…right?

Not according to some. The four hour rescue effort has proven controversial, and emergency personnel say they have been criticized for throwing too many resources at a problem that did not merit it. A comment thread on the original article indicates mixed opinions, including a common response in such situations: a call for the owner of the dog to pay for the expenses involved in the rescue.

While that sentiment comes as no surprise, today’s piece in UK publication the Daily Mail did. I opened my laptop this morning to find the following headline: Barking mad! 50 rescuers spend four hours saving a DOG stranded in middle of frozen lake. Those capital letters would seem to indicate that were a human involved, 50 rescuers would be warranted, and that the same resources dedicated to a dog would be…well, barking mad. 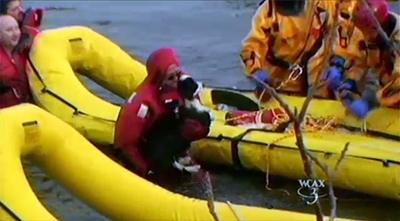 Our take? Those involved should frame the article and display it as a badge of courage. While many are quick to judge, consider the string of reports from this winter involving accidental drownings and dramatic rescues of humans who became stranded in icy waters after trying to save their own dogs before rescue personnel could arrive. Our readers frequently respond to such articles and agree that given the same situation, they would likely venture into icy waters to save their own pets, despite having full knowledge of the risks involved. Had the proper resources not been deployed to ensure the safety of the dog, there is the risk that Panda’s owner might have taken things into her own hands – a decision that could have led to tragedy.

North Hero Fire Chief Michael Murdock echoed those sentiments precisely when he told WCAX, “They will try, and if we don’t try, someone is going to, so it’s kind of a preventive measure.”

So while many will decry the rescue of Panda as a waste of resources, we will find the silver lining in this story and remember what could have been had another dog lover been left to their own devices. Fortunately, that’s not a situation we crazy, barking mad, dog loving Vermonters are likely to face any time soon.