A county employee in Arizona has been fired after mistakenly euthanizing a dog that saved soldiers in Afghanistan and lived through explosions in the war-torn country, officials announced Friday. 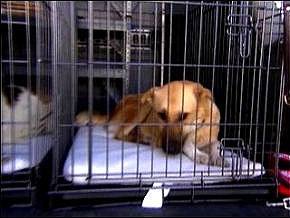 The unidentified Pinal County animal control employee euthanized the female shepherd mix on Monday and was immediately placed on administrative leave. The dog named Target had been brought to the Phoenix area in August by Sgt. Terry Young after his tour of duty.

Target frightened a suicide bomber inside a military base and potentially saved dozens of soldiers’ lives, Young said. He said the dog was treated like royalty from then on at the base at Dand Patan, near the Pakistan border.

The dog escaped from the family’s back yard last Friday. Target didn’t have a tag or microchip and eventually wound up at the county pound.

Last Friday night, Young found Target’s picture on a Web site used by county dog catchers to help owners track lost pets. Young figured the shelter in Casa Grande was closed for the night and weekend. He showed up at the facility to claim his dog on Monday, only to find out she was dead.

County officials say the employee mistakenly took the dog out of its pen Monday morning and euthanized it. “I just can’t believe that something like this would happen to such a good dog,” Young told The Arizona Republic, which said the soldier and his family will get Target’s cremated remains.

County officials are declining to name the employee because of threats made to that person and angry telephone calls to the facility. “We are continuing to look into management practices and procedures to ensure that something like this cannot happen again,” said Lisa Garcia, assistant county manager for Health and Human Services.