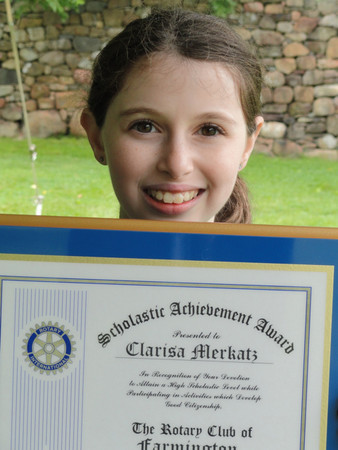 A winning essay from 5th grade pupil Clarisa Merkatz in the Rotary Club of Farmington Essay Contest establishes a ‘woof of rights’ for dogs.

In 1789, the Bill of Rights was created. Our founding fathers wanted to make sure important rights were protected, but they forgot one important sector of the population- -dogs! You might laugh, but as 39% of Americans own at least one dog, it’s more important than ever to establish The Woof of Rights.

Maybe you don’t believe that canines should have constitutional rights to bear arms, but they deserve certain protections. The ones that are critically important to their well-being include:

1.)    the right to adequate gear related to their jobs (and dogs do work!)

2.)   the right not to be subjected to dangerous product testing

3.)   the right to basic care and annual medical checkups

4.)  the right to a local park where they can play.

Provide adequate gear. Nobody can deny that police dogs are a very important asset to every police station. They sniff out things like bombs and drugs, chase lawbreakers, and follow scents of criminals and missing people.  However, their jobs are more dangerous than a policeman’s job because they don’t have to wear bulletproof coats. Accidents happen. A policeman may shoot and suddenly his dog gets in the way, or it might be an intended attack by the criminal. Dogs should wear bulletproof coats. Construction workers have to wear hard hats. Firemen wear protective suits. You can choose whether or not you wear your raincoat.  Everyone in other industries wears what protects them from harmful effects, and it should not be different for dogs. Dogs are also living beings that deserve what’s best for them.

Ban inhumane product testing. Do you ever wonder who actually tries out that new hair conditioner you’re using? Testing labs are now all over the United States. Scientists take animals and try out new “fad” products. Dogs, like people, have allergies to some of the chemicals in the substance, and they may also itch or sneeze. People keep animal testing behind the scenes… otherwise, not as many folks will buy the product. You’ll be shocked to learn that the image in people’s heads of poodles being pink came from scientists who were trying out pink hair dye on the poor creatures. These poor dogs can’t even say whether they like the particular shade of pink die that might be used on them! Are you upset now that your favorite brand could’ve been tested on animals? But you can do something about it. Go with brands that have the “not tested on animals” label.

Provide basic health care. You have an annual doctor visit every year. Nobody likes getting shots, but you go because you know shots will prevent illness. However, your beloved pets can’t say when their stomach hurts. You might think they must not be sick, right? “Oh, I must have imagined him whimpering in pain,” you say. That is NOT the case. Annual checkups are just as important for dogs as they are for people, but barely a hassle because they usually last less than an hour. During a checkup, for example, dogs get shots that prevent life-threatening diseases like Lyme Disease.  Still not convinced? Three hundred forty-two dogs die every hour, and this has been going on for decades mostly because they never got the shots they needed. Don’t neglect your four-legged friend. One checkup a year can save your dog’s life.

Take your dog out to play. You can’t wait to take a long run through the park after a hard day at school. Dogs, however, don’t have that luxury. Many parks are banning pets from entering because park recreation departments have been increasingly concerned in having, “clean, pristine, parks”. But in New York City dogs are cramped and not getting the exercise they need. Central Park doesn’t always allow dogs, and they always have to be on a tight leash on the sidewalk in other parts of the city. According to Dogpark.com, there are only nine public dog parks in central Connecticut. All you need for the park to become your dog’s favorite place is a fenced-in field, some sunshine, and the company of other dogs. That can even be your backyard!

At the October Town Council meeting in Farmington, a dog park was proposed on the fields on Meadow Road. However, nothing has been done about it yet. If you are interested in having a park that welcomes four-legged friends in our town, make sure to take a bag to pick up any waste whenever you go for a walk. As a result, it’s more likely Town Council members will make arrangements for a dog-friendly park in Farmington.

There’s more.  Dogs are starved, ignored, over heated, put in bad working conditions, not respected, and overcrowded. Why do these problems still go on? You might laugh at the idea of constitutional rights for canines, but we’re not talking about the right to vote, (we’ll revisit that issue another day). Dogs even serve in the military, so why shouldn’t we protect their safety too? 21%of owners adopted their pooch from an animal shelter with the intent of making as many dogs’ lives better as possible.   We can take steps, one paw at a time, to show we care. Educate others about what dogs need, take care of your own pet, and speak out. You can even sign an animal’s rights petition that will be sent to Congress at http://org2.democracyinaction.org/o/5141/p/dia/action/public/?action_KEY=5078. That is the best thing you can do.

We must take a stand for what is right, and secure a Woof of Rights for these important animals.