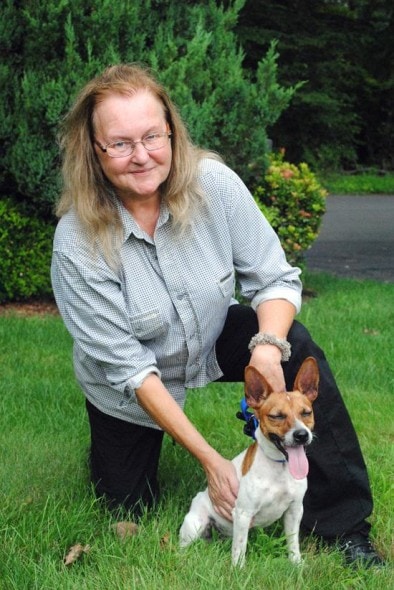 There is a happy ending for Jax, a one-year-old Jack Russell, that was viciously beaten and then thrown from a bridge into oncoming traffic.

Last month, a group of witnesses watched in horror as they saw Alexander Rosario, kick, pummel and slam Jax to the ground. He then proceeded to lift Jax up and throw him from a bridge into traffic.

Fate intervened as Jax ended up getting caught on a 12-foot-fence by the collar. Police found him dangling from the fence when they rescued him. Jax was taken to Bethany Veterinarian Hospital for treatment.

Jax was then taken into the care of animal control which is where he met his new owner, Ellen.

Ellen, who was still heartbroken over the loss of her 15-year old Jack Russel, thought it would be best to bring home another dog. Ellen drove to the Woodbridge Animal Control Facility twice to meet with Jax before she decided to adopt him.

Jax was adopted into his new home Tuesday. The Register is not identifying Jax’s new owner due to the nature of the crime and circumstances surrounding the incident. Rosario was charged with one count of cruelty to animals.

“We had a lot of applications but, in the end, Jax deserved to be an only child for a while,” said Karen Lombardi, Woodbridge animal control officer. “The deciding factor in this particular case was [Ellen] explained he would be her family, and Jax deserved to be in a home like that.”

Currently, Jax is getting used to his new home as he and Ellen continue to get to know one another.

“I’m a lucky person because he was a lucky dog,” Ellen said.

Ellen has gone out of her way to make Jax feel right at home. He has a new bed and food bowl, as well as lots of toys to occupy his time.
“He loves his chew toys,” she said.

Ellen has continuously praised the care that Jax received from Woodbridge Animal Control.

“I think animal control were the nicest people and took good care of Jax. They even gave me a new leash, collar and crate to transport him home in,” Ellen said.

Ellen has taken quickly to Jax and his friendly demeanor.

“I want him to be happy and healthy and have a good life,” she said.

Although things turned out well for Jax, Ellen holds a lot of concern about other dogs in similar situations, “If you don’t want to care for your dog, please take them to a shelter. They are helpless creatures. I don’t know the reason (Rosario allegedly committed the act) … I just wish he had just taken Jax to a shelter,” she said.

Alexander Rosario, 32, has been charged with cruelty to animals.