A Man and His Dog: The Unending Bond

A fan submitted this story to us, and it is a must-share.  Grab the tissues…

When I was growing up, I was told two HUGE whoppers by my dad… he had the best of intentions, mind you, but these were just plain wrong. I have found smaller ones, for example: it turns out that honesty (like a few other virtues that come to mind) is sometimes vastly overrated. Or that ‘there’s good in everybody’. That one has turned out to be a big disappointment (and dead wrong) as well.

But these two are the biggest. The first: There was no such thing as monsters. I haven’t figured out whether he was lying to me, or just wrong.

I have been dealing with a particularly savage monster for a while now. His name is Osteosarcoma (bone cancer – unbelievably aggressive and QUICK), and he has picked our friend Kronk out as his victim. Kim and I have been fighting tooth and nail for over three months, but each day we get a little weaker and the bad guy gets a little stronger. We know we were going to lose in the end, of course-but that in no way changes one’s obligation to crawl into the ring and deal out as serious a beating as you can manage – until you just simply can’t. The bells rings and the final round ends.

We did manage to forcibly take some additional time – by breaking a few heads and going some places we don’t normally go we snaked some compounds that gave the cancer a severe setback-fighting the various government agencies that didn’t want us to have it for some reason. But we could only hit the ‘snooze’ button a certain number of times before we are faced with the inevitable; the birth certificate is a two-part form. And, sooner or late, the second page is going to come into play.

There is always something uniquely horrible about looking into friends’ eyes and knowing that they are in pain. That they don’t understand why you can’t do anything about their hurting, or even why it occurred in the first place. Why, as leader of the pack, you promised to protect them against all that would do them harm and are failing so miserably. And yet, even as you flail and rail and scream into the night they forgive you; they are concerned about the howl of misery that you are fighting to keep from leaping from your lips and slashing at the very sky. And why your promise includes yourself as one of the ones that you will protect them against. No matter how hard you rail, no matter how loudly you scream. There comes a point where you are hurting them to hold off your pain as long as you possibly can.

The second lie was this: that time heals all wounds. No, it doesn’t. The best you can hope for is that you’ll learn to live with gash in your soul, and maybe avoid tearing it open too often. But the hole that has been torn in your very being never truly goes away. Like a mirror that shatters in front of your eyes – you can still make out the image, but the picture will never ever be whole again. All you’ll ever be able to do is catch glimpses out of the corner of your eye of the crystalline multi-colored fragments of endless shattered dreams. Dreams of playing ball. Dreams of barking at leaves, at chasing motes of dust in a sunbeam. Dreams of long walks by the lake, sniffing and sniffing and sniffing. And grinning. God, how I am going to miss that grin.

And you wonder how this can happen to someone that has never ever hurt anyone in his life. I have had a rougher life than plenty of people; was on the road for a great part of my college life (went weeks at a time without seeing the sun) and have seen some things that will truly make one question whether there can possibly be a God that watches over us. Of course, that pretty much proves the point, for without some sort of caretaker this race would have been doomed a long long time ago-taken to ground by the first woodchuck that we happened across. By why does Kronk have to go, when so many undeserving manufacturers of misery seem to thrive? But if it hadn’t been for one of those trogs I never would have met Kronk in the first place-perhaps there is a plan after all.

If I was running things we (dogs, cats, people) wouldn’t have different life spans—with reference to Ernie Stewart we would live rip old ages and pass side-by side a few hours apart in warm safe beds.

And how can one ever survive losing a parent-or worse losing your child? Bill Steffins said it to me best; Kids kind of expect to bury their parents. Parents never expect to bury their child. If I am going through this after only knowing a non-vocalizing furry pain-in-rump (sometimes) for a few years how can anyone ever keep going? I would give anything to keep that question rhetorical…

One of the things that we were proudest of in Kronk was how many other mutts he helped rehabilitate; our goal was to have him spend out his days going to the old-folks and retirement homes to cheer those guys up a little. With that loopy grin and his doofy head shake everyone who ever met him instinctively trusted him. Except with salmon – don’t trust him with salmon. He weighed that cost-benefit and elected to go for the goal.

I am trying to focus on the good that he has accomplished – at the joy that he brought into our and countless other lives. He didn’t just sit in a back yard somewhere; he served as an ambassador to help increase awareness that – like people – your appearance doesn’t dictate who you are. And he converted quite a few people that would have otherwise not known how much fun he could be, or how happy a big slobbery mutt can make you. The older folks didn’t seem to be terribly amazed that he was friendly – they just seemed to be happy that he was paying attention to them without any reason other than he liked them. Going to miss that as well. 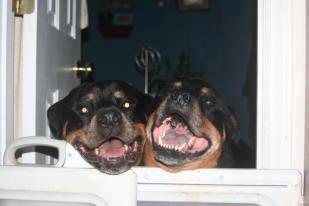 Just left the vet after looking at an x-ray that appears to be a time-lapse of mushrooms growing; the lungs aren’t even recognizable anymore. Of course this isn’t a judgment call-I guess I can Thank God for that small mercy. I think about the nights getting up to take him out at 3 a.m., the picking of his 100 lb carcass out of bed every morning (he was sleeping with Kim – I got the sofa) and placing him back in bed every night. The specialty food, the running home at lunch to give him pain meds. Having to watch him on the sofa; he wanted to go harass and play with the other dogs but we couldn’t take the risk of him shattering an already fragile leg. The constant travel to get high pH water, the reading of so many bloody labels to avoid processed sugar that I was ready to scream (it’s in EVERYTHING!) Fighting to get him to go outside to pee (it hurt to walk) and then fighting again to get him to come back to dinner. We would do it again without hesitation.

But as I drive home from the vet’s (I pulled off the highway to write this before it escaped my mind; typing on this crappy little cell-phone is a punishment itself) I am struggling with the fact that there will be only one more sunrise. No more ball playing. No more licks or mooching from the table. No more ringing the back door chimes to be let out. No more snoozing in a comfy sunbeam. No more nuzzling my arm when he wants to be petted.

And I guess now I realize that Dad lied to one more time: Big Boys Don’t Cry. I can hardly see the road.