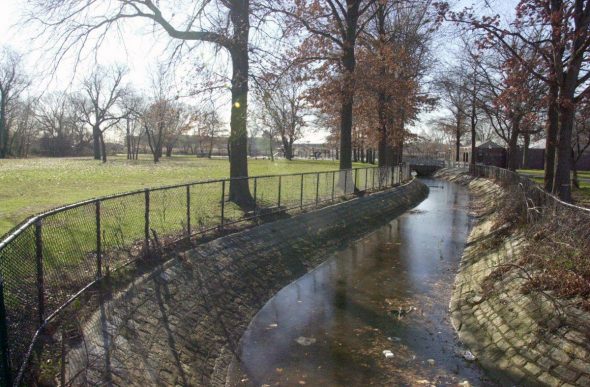 According to police reports, a young man was chased down and stopped by a pair of stray dogs after he grabbed a woman’s purse and ran away with it.  No one really knows why the dogs decided to stop and help out, but we’re willing to be that the woman whose purse was stolen was very grateful for the assistance!

The teen is said to have taken the purse off of a woman walking in a park in Queens, New York at around 8PM on Tuesday.  The woman had just gotten off of a bus at 145th Road and Springfield Blvd, and had placed the purse on a bunch for a moment.

When she looked up, she saw the young man grab her purse and take off with it.  The teen took off into Springfield Park, and looked to be trying to make an escape to the other side of the park.  That’s when the teen noticed that he had two dogs after him, close behind.

A stray pit bull and a stray German shepherd noticed the kid running with the purse and took off after him.  They chased him down and tackled the teen to the ground.  When officers arrived, the teen was on the ground with the purse, struggling to get away from the dogs.

“We have no idea why these dogs zeroed in on the victim, but once they did, they wouldn’t let go,” said one police source to news outlets.

The police had a bit of trouble getting the dogs off of the kid, but they eventually did and the dogs were given over to animal services.  The purse was returned to the rightful owner, and the teen was taken to the hospital where he was treated for some bite wounds he got from the dogs.  The teen was then returned to his parents, and he has been charged with petty larceny.  He’s expected in family court in a few weeks.