When Marcus Montgomery, an officer with the Fort Walton Beach Police Department in Florida, received a phone call for some help at the Panhandle Animal Welfare Society, he never expected to fall in love.  But that’s exactly what happened when he met a puppy that had been abandoned in a box in the freezing cold, and now his other rescue pit bull, Vader, will get to be a big brother to little Kylo! 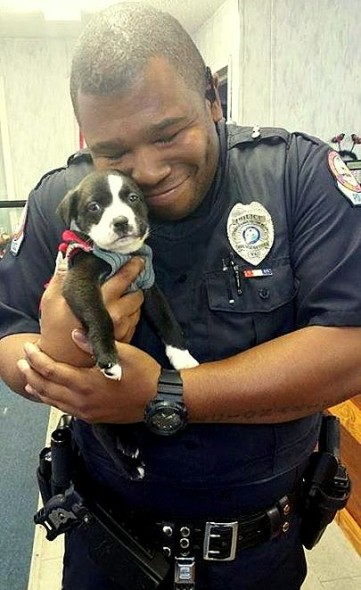 This is what Officer Montgomery told me:

It was Tuesday January 26, 2015 and I was dispatched to PAWS for a situation regarding a past employee that they had just terminated. I was speaking with the Director of PAWS and the supervisor that was directly over the ex-employee when she had stepped out of the room and I stayed behind speaking with the Director. As I began to wrap up my conversation with her, the supervisor came back into the office with Kylo in her hand.  As soon as I saw him, I said “don’t bring him in here or else I will take him home right.”  The staff there knows of my current rescue, Vader, and how he needed a friend/sibling.

I asked if it was ok to hold him, and she gave him to me. When I held him close, he bumped his nose next to mine and licked it. I knew right then that I needed to get him.  The supervisor explained to me that he was left all alone in a box behind their building overnight. During that time, we were achieving between 30 and below weather, so just thinking about him out there all alone, probably so confused broke my heart. I’ve heard him whine and cry, and just imagining him in that box by himself, tugged at my heart terribly. 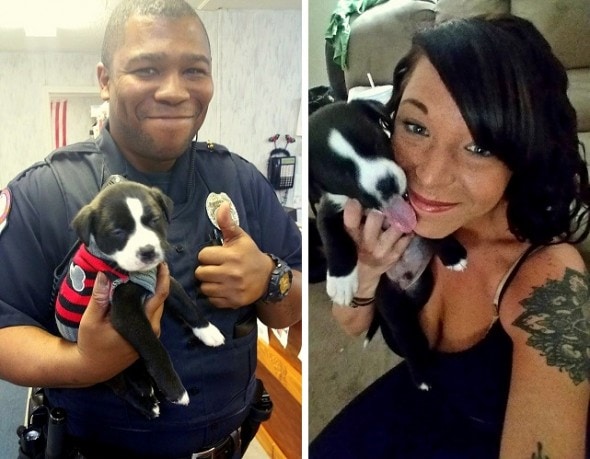 Initially, I didn’t think I’d be able to care for a puppy due to my working schedule and my girlfriend’s, and I explained it to the staff. They knew Kylo would be in good hands, so they explained to me how we would be able to care for Kylo in between the times we wouldn’t be home. At first I didn’t believe them (lol) but the reiterated that as long as he’s not in a completely enclosed space, has food and water, he would be fine.  So I told them, I would talk to my girlfriend first and make sure she would be ok with another dog, plus it was her birthday coming up and if Kylo took my heart away, I knew she wouldn’t be able to resist, either.

So after talking with her, she agreed and was excited for Vader to get a new friend. So we had that Thursday off together and travelled to PAWS and brought Vader with us. Kylo instantly wanted to play with him. At first Vader was apprehensive, and I believe it because we’ve trained him to basically “ask” if it’s ok to do things. Kylo is much smaller than him, so he viewed it as “I might hurt it.” 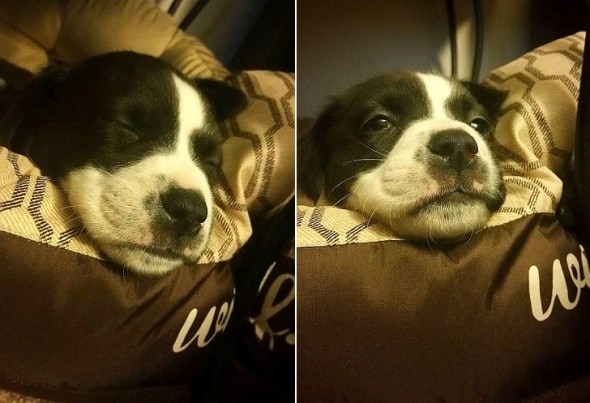 Vader had been at PAWS for a year and some months before we got him. Pit bulls/mixes already have a bad rep, so they don’t get adopted as much as other breeds.  I looked at Kylo and knew he was a pit bull breed/mix and I didn’t want him to go through the same process as Vader. People tend to only see the cuteness but not want to deal with the work behind it.  So when we got to interact with Vader, he was so depressed. He immediately laid down, and you could just see that he’d “given up” – that no one would love him. But I looked at him in his eyes and said “you’re going home with me, buddy.” Thus, Vader he became (lol) and he’s been nothing but 75 pounds of love. He loves children, “babysits” infants, and most of all is a great example for Kylo.

I told my girlfriend that since I got to name Vader, she can name our newest edition and she already knew it was going to be Star Wars related. At first she was going to name him Finn, from the latest movie. But, she looks at me the day we picked him up and said, “you know what? We have Vader, why not Kylo?” The only thing I could say was “perfect.” 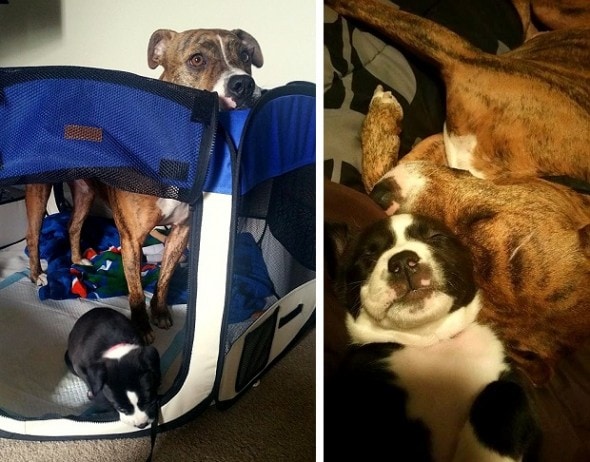 Ever since the picture was taken, some people thought I was doing it for fame or recognition, but it wasn’t like that at all. I love all animals, and Kylo’s story, although just beginning, needed to have a new beginning. And I honestly hope that with this recognition, PAWS gets most of the attention and admiration. They really do so much with what little they have, being non profit, and make it work. They are such a great organization and I hope Kylo’s story teaches people to look into their local animal shelters and give these abandoned dogs a new lease on life.  Don’t let them go forgotten in the black hole of a shelter.  Just let them know they can be loved again.

To see more of the loveable mushes that PAWS has to offer, CLICK HERE.

#Thunderbuddies. Vader has never liked thunder or loud sounds like that. Kylo was playing and then heard a loud pop of thunder and jumped up and ran to vaders hiding spot we made fir him under the table. ?