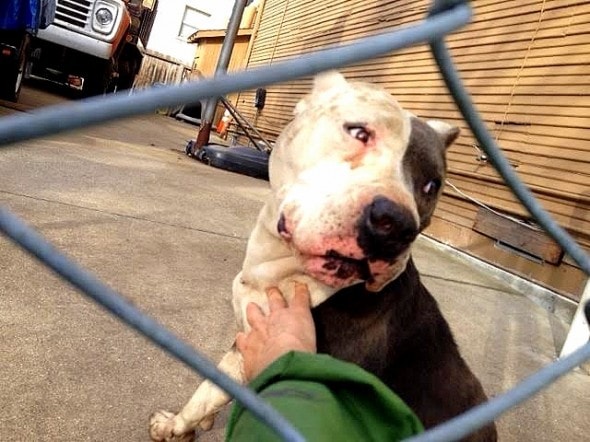 Oakland, a week before Christmas. The wind is insane and the sky spews giant marbles we’re supposed to believe are raindrops. All I can think of is the barber’s dog, seeking cover under the truck or crouched at the back of his door-less doghouse, no bedding or insulation of any kind. My only solace is knowing that this miserable stretch for him has an expiration date.

I call him the barber’s dog because he lives on a cement lot next door to a barbershop, but if you want to get technical, Fella doesn’t belong to the barber. The owner of the shop — a young woman — rents the space from the dog’s legal owner, a man who doesn’t even live in Oakland. It’s through her that I leave notes for this absent guardian, offering to walk his dog or drop off flea powder. And she’s the one, back in September, who gives me the only message I’ve ever gotten back: “You can have Fella if you want him.”

I want him badly, but my house is at capacity, animal-wise. So the search is on.

It’s early December when Nancy emails, asking if I’m still looking for a home or group to take the barber’s dog. Nancy runs one of the most highly-regarded pit bull-focused rescue and advocacy organizations in the nation — ColoRADogs — out of Fort Collins, Colorado. We’d met in person only a couple of times, but she’d been following his story.

Nancy writes that she hasn’t been able to get Fella out of her mind. She tells me a voice keeps needling her about him, and she’s been doing this work long enough to know not to ignore it. I give her as much information as I can about this dog — and acknowledge the many unknowns. She listens, and then offers to drive out to Oakland in January to get the barber’s dog. I’m more than welcome to ride back with her and help him get settled. She even has a foster home already in mind and how does that sound to me? 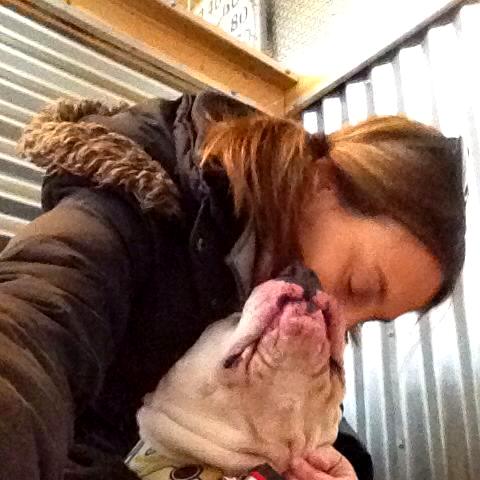 I tell Nancy that I never thought this day would come. I tell her if she ever needs a kidney, I’ve got a spare. I tell her she’s making an optimist out of a card-carrying cynic and that they may revoke my sarcasm privileges.

January is still a month away, so I make the most of my visits to the barber’s dog. If I time it just right, usually a little before noon, I see the man with the grocery cart. His clothes are tattered and he mumbles to himself as he rummages through the recycling bins and trash cans that line the street. He never acknowledges me, just tosses the scraps he’s scrounged over the fence to Fella. Sometimes it’s a few pieces of pepperoni pizza, sometimes leftover Chinese food. Sometimes chicken wings, bones and all.

It messes with your mind a bit to see this. A human with so little, sharing his spoils with a dog who isn’t his. The whole scene eats away at one’s pessimism. And prejudice. There are more than a few of us who care about the barber’s dog.

One day, an art student and her roommate come by. They say they, too, have fallen for this big stinky blockhead. We share concerns about his lack of fur and the bumps on his muzzle and his long hours alone. I tell them I’m going to be away for the holidays later in the month. They offer to take up the daily visits in my absence.

I get to know the super for the property as well — the guy who feeds Fella. I learn he isn’t paid to do this. He buys Nutro and Alpo with his own money and he comes by daily to replenish Fella’s food and water because he doesn’t want the dog to starve. With the owner absent, he could’ve surrendered Fella to Oakland Animal Services (almost a certain death sentence). He could’ve chosen to do nothing at all.

And so I come to appreciate each piecemeal, discrete act of kindness. They never added up to a particularly happy existence for the barber’s dog, but they were enough to keep him alive. 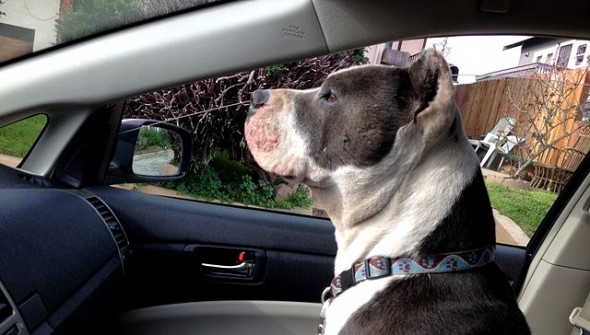 I talk to the super to arrange the hand-off, and on Thursday morning, January 8, we meet at the property. He unlocks the gate to the cement lot, and for the first time ever, I kiss the barber’s dog without feeling metal chain link pressing into my face. I open the door to my car and Fella scrambles in.

He does not look back.

I take photos to prove it, but it’s still surreal to see the barber’s dog in my home. Friends come by, as does the art student with her boyfriend. Many bring gifts for both of us. Fella is every bit the gracious celebrity, welcoming each visitor with almost childlike sincerity. He tests out the various dog beds and keeps looking up at me as if to say What happened? I’m king for a day! I want to tell him not to worry, that he’s king from now on. 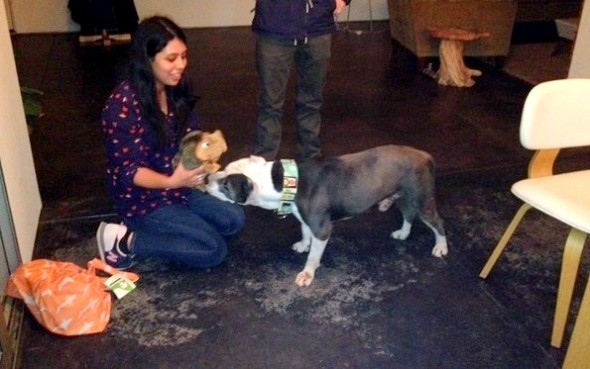 When it’s finally time to turn in for the evening, Mike fashions a giant bed from old cushions and blankets, and Fella and I hunker down together. Every so often I wake up and cry, my tears of joy and disbelief mixing with his puddles of drool on the pillow. He doesn’t move from this position all night.

And then it’s Friday morning, time to hit the road. Nancy picks us up early — we have 17 hours of driving ahead of us. Our plan is to spend the night somewhere in Utah, get up early the next morning, and finish the drive.

Fella alternates between squishing on my lap up front and napping in the back. At each stop, he amazes me with his easiness, his softness in his movements. He stays close and accepts every mile of the journey without complaint, without question. When I can’t stay awake a minute longer, I crawl in the back and curl around him, and for hours we sleep. Nancy doesn’t wake us; she drives straight through the night. This dog has been waiting long enough to come home, she says. 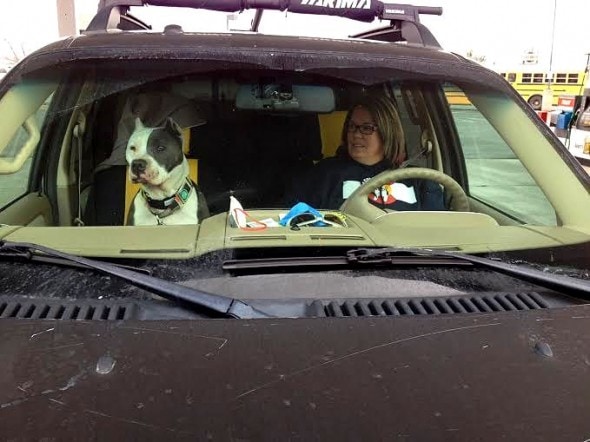 It’s late Saturday morning when we arrive in Fort Collins. Fella will stay in the Rad Pad, a heated indoor/outdoor structure on Nancy’s property, designed to keep the dogs she rescues comfortable for the time they’re here in transition. Fella will stay for at least a week to decompress, get checked by a doctor, and just generally settle. For the two days I’m there, Nancy and her partner grant me unrestricted access between their home and the Rad Pad. Food, bed, unlimited tissues included.

Fella and I revel in the togetherness. We nestle in his dog bed and we sit in the sun. It’s all so new and I begin to worry about what I interpret as incredulity in his eyes. But with each hour, he grows more assured that the toys, the blankets, the attention — it’s all for him. 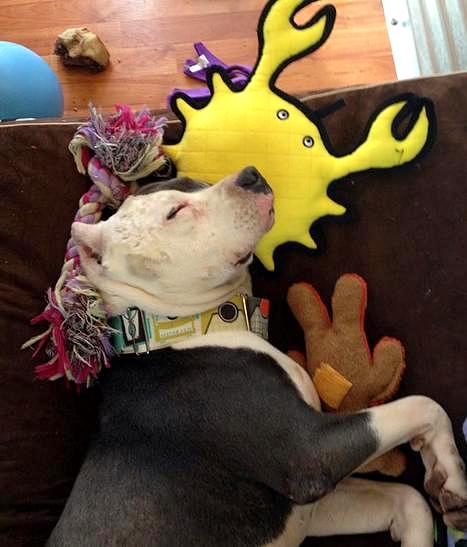 We’ve connected so deeply in these last few days that I can’t fully acknowledge, let alone comprehend, my looming departure. I practice leaving Fella for short stints. At first, just a few minutes at a time. By Sunday evening, I can steal away for longer spells without worrying about him pining for me. My pining is another story.

It helps that Fella’s arrival here was highly anticipated. Folks from all manners of the ColoRADogs network come by to say hello, including the woman who has signed on to foster him. (She is lovely. I exhale.) A vet student shows up with a handmade snood, knitted just for him. 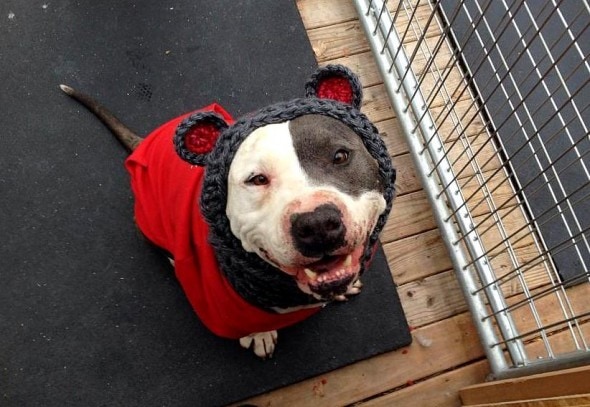 At one time, this dog didn’t even have a collar. Now he has a snood.

Monday morning arrives uncharacteristically gray. I explain to the barber’s dog that I have a flight to catch. And then one of us embarrasses herself by completely falling apart.

As much as I want to, for Fella’s sake, I’m unable to hold back. I cry sad tears because I can’t communicate that though I’m leaving, he’s in safe, good hands. I cry selfish tears for missing him, for not knowing when the next time is I’ll see his face or sniff his stink — and for no longer being the one who’s there to comfort him. And I cry useless, wasted tears for all those years he spent lonely and bored and cold, this dog who looks into the eyes of every person he meets and says, “I trust.”

Finally I bring myself to say goodbye … for now. 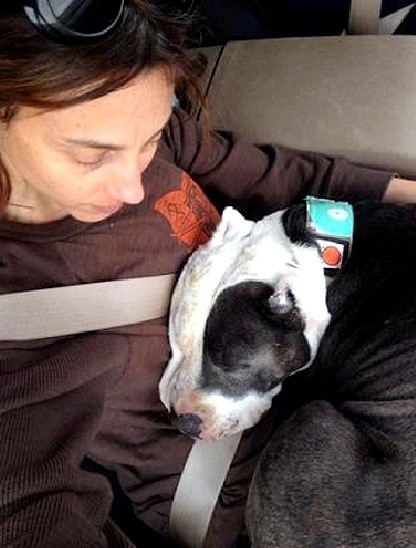 Tuesday back in Oakland proves particularly difficult — the first day in over a year my lunch time is my own. All I want to do is breathe in his stink and scratch his belly and tell him it will be ok. He doesn’t need me to do that anymore. It’s the new normal for both of us.

Nancy, god bless her, provides regular updates and sends photos. I look at flights and make plans to visit in the spring. And I practice using his new name, the one we agreed on while I was in Colorado: Fergus. Nancy says Fergus comes from the Scottish and means “strong man.” My own first name is Scottish as well. I’m told it means “fortress.” Or “protection.” For once, the meaning resonates. 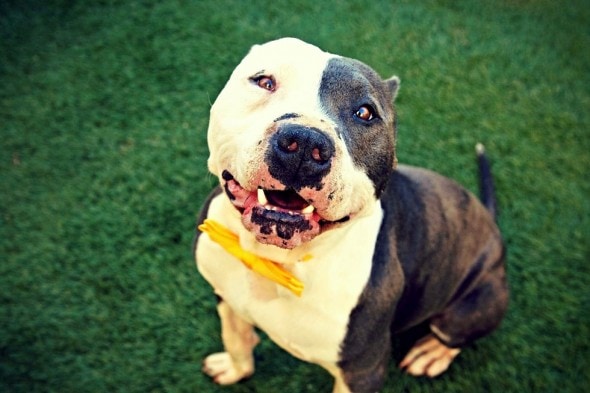 I never did find out for sure why the barber’s landlord wanted me to have his dog. The barbershop owner didn’t know either — she said maybe he realized someone else could provide better care. For all the time and energy I squandered being angry at this nameless, faraway person, today I have to respect his action. In the end, he did right by this animal.

And this is where the story of the barber’s dog ends. It’s where Fergus’s begins. 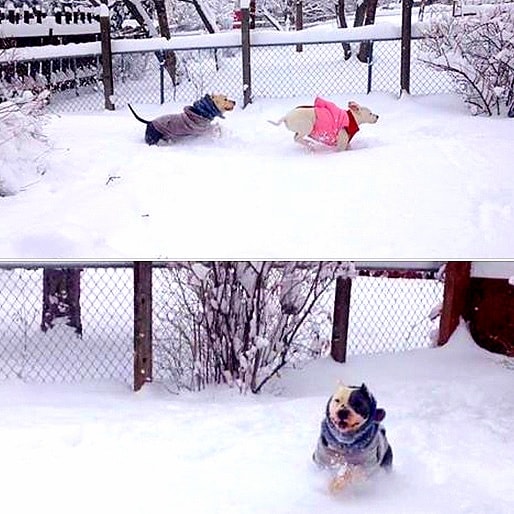 Fergus is not currently available for adoption, but keep checking with ColoRADogs.  He is being fostered as he goes through a transition period from lonesome, outside dog to indoor, family dog.  To follow his progress, become a fan of his Facebook page.  The photos of him looking happy with his new BFF are just too cute!