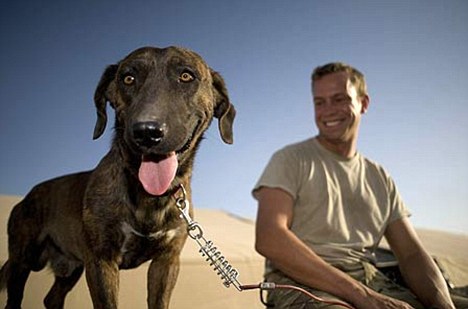 A stray Afgan dog doesn’t have much of a chance at a happy life, but Brin took matters into his own hands.  The underweight mongrel, thought to be a pit bull jack russell cross, began following British units out on dangerous patrols and soon revealed his super power – sniffing out deadly roadside bombs.  Amazingly, with no known training, he would stand and bark at suspicious mounds, allowing soldiers to avoid or destroy any explosive devices and saving lives in the process.

Brin became so good at what he did, and so famous for it that the Taliban kidnapped him, prompting a dangerous rescue  mission to get him back.  He suffered a broken nose and ribs in that ordeal and was nursed back to health by Captain Mark Townsend.  Unfortunately army procedure states that when a unit moves out of an area the dog stays behind or gets put down, but no one wanted that to happen to Brin.

Townsend sent word to his friends in the UK, asking for help to save this dog’s life and the response was incredible.  Teacher Sally Baldwin, together with an animal rescue group coordinated the effort to raise 4000 pounds and get Brin out of Afghanistan.  Though he has to spend 6 months in quarantine, he will lead a very comfortable life after that with Baldwin.

“During his battle experience he learned to sleep while standing up. It’s so moving when he dozes off and relaxes completely, seeing this adorable refugee dog safe at last. All the soldiers are thrilled he will be home when they get back,” said Baldwin.  “Everyone agrees this dog is worth all the trouble. I’ve had a lot of animals but never one like Brin so I understand why they all loved him so much. There’s something about him, it feels like he’s looking out for you. He’s very special.”

Townsend could not keep Brin himself because of his deployments but is thrilled that Brin will be in a safe and happy home and plans to visit.  Baldwin acknowledges that it will be a big change for Brin, saying ‘This is a dog who will have never seen grass, who it took the troops weeks to teach how to fetch a ball and who has lived all his life surrounded by the sound of gunfire.  I know it will be difficult and I am prepared to provide the specialist care he will need. I live in a nice big house with a big garden and I am near plenty of lovely country fields so in time he will be a very happy dog.’