Within the verse of this humorous limerick you will find many facts about ticks, where they live, how they work, symptoms of Lyme disease, and how to prevent. Enjoy! 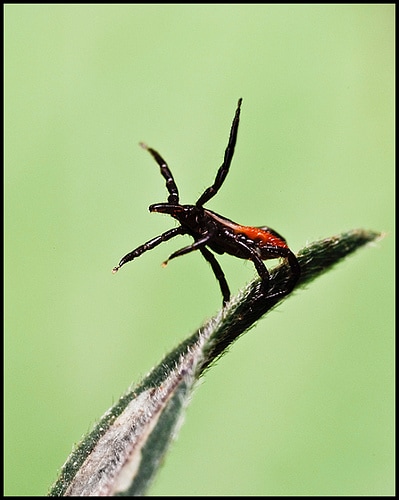 There once was a tick that had Lyme
A bacterium of spiral-shaped spirochete kind,
It had its choice of some hosts
This it could bite and then coast
Till it had its fill and felt fine.

He thought about choosing a cow
But lived in the suburbs of town,
It was the same with the deer
And the horses I fear
“It’s a dog, cat, or human, I vow!”

So he waited and sat on a blade
Of grass that was in a small glade,
That was brushy and bushy
Where he could hide his tushy
To attack in wait he did lay.

As he sat his mind it did zing
about tick collars, vaccinations, and things,
That would render his bite
Less effective, less might
And to tears it soon did him bring.

Just then a dog come on by
And the tick leapt adroit as a fly,
Burrowed down in the fur
As snug as a burr
And bit down with a satisfied sigh.

Three weeks later, the dog he was sick
He couldn’t eat, had a fever, felt ick,
He was stiff in his joints
Had malaise – to a point
All this from one tiny, small tick!

To the vet his human did go
With the sick dog dragging in tow,
The vet was quite glad
That the dog wasn’t that bad
And said “This could be worse you know!”

“He could have had problems with kidney and heart
Swollen lymph nodes, dehydration and art-
Ticular swelling
And gee there’s no telling
How quickly this dog would depart.”

So in closing we give this advice
With Lyme there’s no rolling the dice.
Keep brush well away
Keep all ticks at bay
Medicate and prevent, will suffice.