Last week, in High Point, North Carolina, a mother dog and her two puppies were found abandoned in the cold.  They were dumped on a street corner on a freezing sold night, but thanks to the police officers that rescued them from the street and the dispatcher that took them in, they now have forever homes.

Joe Bartsch and his wife saw a news story about the three, and decided to adopt the older dog, and call her Maggi.  He called her two pups Marshall and Rory.  He said that almost right away his wife had fallen in love with Maggi, and he knew they’d be adopting her.

“Just within the two days that we’ve had her, we are falling in love,” said Bartsch.  “I saw the story and I said, ‘you know something has to be done.’  I just hated the fact that that somebody would dump out the dog and then the puppies along with her.”

Maggi seems to be very happy with her new home and family.  Even though she’s been through a lot, she starting to adjust very well, and Bartsch knows Maggi will make a great dog for him and his wife. 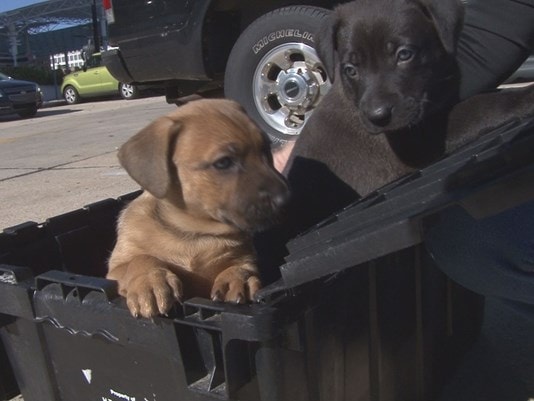 “We lost our dog and I thought it would be great for my wife to have another dog to give her company during the day while I’m gone,” Bartsch said.  “She’s going to be a great addition to the family.”

One of the puppies was adopted by Dawn Watlington.  After Watlington saw the news article about the dogs being abandoned, she became very upset.  She knew that she had to help in some way, because she just couldn’t believe that people would treat another living being that way.

“Anytime you hear about someone being so cruel and leaving these precious babies out in the cold and their mama, you know it just tugs at the heart,” said Watlington.

The dispatcher that had taken the dogs in at first got a ton of interest right in the area of High Point as far as people looking to adopt the dogs.  She said that she knew the puppies would be adopted out pretty quick, but she wasn’t completely sure about Maggi.  Sometimes it is harder to find a home for a senior dog, but that didn’t seem to be an issue.