Stormy Edwards says she was creeped out when she heard barking coming from somewhere in the dark at Springfield’s Stuart Park.

The Illinois woman was walking her pooch in the dog park on Thanksgiving night when she heard the cries of a dog in distress. She crept forward cautiously, walking about a block and nearing the source of the sound. A few steps later, there stood Antoinette, a frightened cockapoo, abandoned in one of the park’s pens.

“I went into the enclosure, and my dog went in with me,” she says. “I had a flashlight. I tried to get a photo of the dog. A person had left a dish of lasagna and a bowl of water. I found the note under the lasagna.” 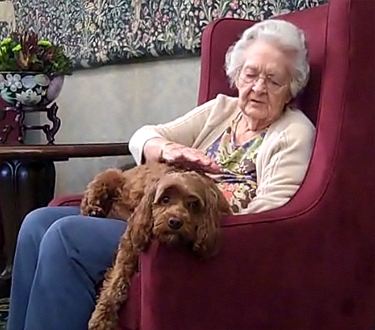 The heartbreaking note began, “My name is Antoinette, Annie for short.”

The letter went on to mention that Annie’s shots were up to date, and that she was spayed. It also explained that Antoinette’s owner, a woman, had fallen ill and could no longer care for her. She was hoping another dog lover in the park would find her and take her home. The note ended, “Please take me home. I am a loving dog.”

“That’s when I burst into tears,” Edwards said.

Annie was eventually taken to Sangamon County Animal Control, and her former owner could not have wished for a better turn of events.

Animal Protective League volunteer Carol Rodgers, saw Annie, and knew that the owners of  Regency Nursing Care were looking for a live-in dog to provide pet therapy for its residents.  Rodgers told Erin Sabath, one of the owners of Regency Nursing Care, about Annie and her tale of woe. Sabath visited Animal Control to meet Annie, and said it was love at first sight. Annie was given an chance to try some on-the-job training, and was an immediate hit.

Now Annie spends her days walking the hall of  Regency with a handler as she greets everyone. She has already learned that the dining room is off limits, and seems to understand that she needs to be gentle in her approach with elderly residents – who just can’t get enough of her.

“Everybody who sees this dog falls in love with her,” Sabath says. “She’s wonderful.”

Carol Rodgers said Annie is very healthy, and she believes that whoever left her in the dog park took good care of her until they were no longer able to.

“It makes me think that this owner honestly didn’t know what to do,” Rodgers says. “It may have been an older lady who was sick and didn’t know about Animal Control or APL and thought, ‘Well, people who go to dog parks like dogs.’ Wouldn’t it be nice if the owner reads this and knows the dog is safe?”

Anonymous dog owner, if you are reading this, know that Annie is safe and loved. She didn’t just find the loving home you had hoped for – she also found her calling.