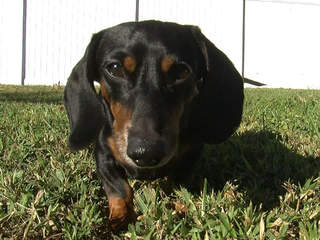 Sandy Lewers went to the Humane Society to pick up her missing cat when she heard the bark of Willie, a paralyzed dog that had been abandoned over a month ago. Lewers would end up returning home not only with her cat, but Willie too.

Over a month ago Willie was found lying in a box next to a dumpster. He had been thrown away like trash. From the waist down he was completely paralyzed. He was brought to the Humane Society of Tampa Bay where with some extra care and some steroids he has regained function of his lower body. He gets around with the help of a wheelchair. The staff at the shelter knew he would need a special home.

There couldn’t be a more perfect home for Willie than with the Lewers family. By chance the Lewers’ cat escaped over the weekend and ended up at the Humane Society of Tampa Bay. When Sandy Lewers came to the shelter to pick up her cat she heard Willie bark and knew she had to meet him.

“I heard the very unique dachshund bark. I know that bark, and I demanded to see the dog,” said Lewers. “I saw Willie, and my heart melted.”

Lewers has had dachshunds all her life and was equipped to handle one with special needs like Willie.

“We have two autistic kids, and I have a dog who was in a wheelchair, so I was ready for it,” said Lewers.

Lewers knew Willie belonged with her family and took him home that day. In just the few days that he has been home he has already fit in with the family and made a big difference as Willie has bonded with Lewers’ children and helped her daughter with some sensory issues already.

The staff at the Humane Society of Tampa Bay is thrilled with Willie’s happy ending and couldn’t imagine a more perfect family for him.