Joy had been found as a puppy, abandoned on a sidewalk.  Fast forward to today, and he has a wonderful life with a loving family from the Netherlands.  This video shows his transformation from a dog nobody wanted, to a revered member of a family and a best friend.

When Joy was found, he weighed only 160 grams, or 5.64 ounces for those of us using the imperial system.  Talk about a tiny little fluff-ball!

Joy’s origin isn’t fully known, and it is assumed that he was either orphaned, or someone had abandoned him in his first day of life.  Either way, it was an uphill battle for him from the get-go.

For the first few weeks he was at the shelter he was brought to, he did A LOT of eating and sleeping. Naturally, he was as adorable as it gets through every second of it!

While at the shelter, he was given a stuffed tiger as a toy.  It remains his favorite toy to this very day.

He really loves that tiger!

As time went on, he got bigger and stronger.  At seven weeks, the fluffy little itsy-bits was simply irresistible.  Soon, he would be ready to start the search for a forever home with a good family.

While at the shelter, it was discovered that Joy was a very friendly dog.  He was no problem at all when it came to being social, and even had a few friends at the shelter.

A family in the Netherlands found out about Joy’s story.  They knew that he would be a perfect addition to their family.  They packed themselves up and set off to see about adopting him.

As luck would have it, they really were the perfect family for him.  They got to bring Joy home, where he resides and an honored member of the family.  He is happy and healthy, and loves his new humans very much. 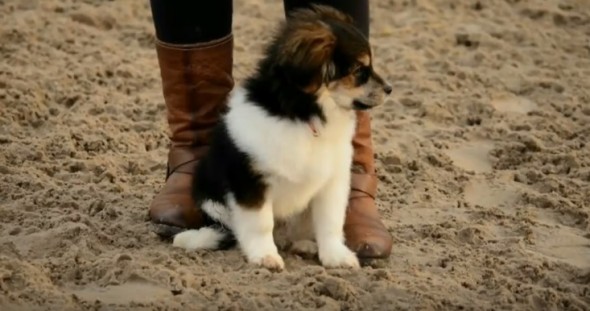