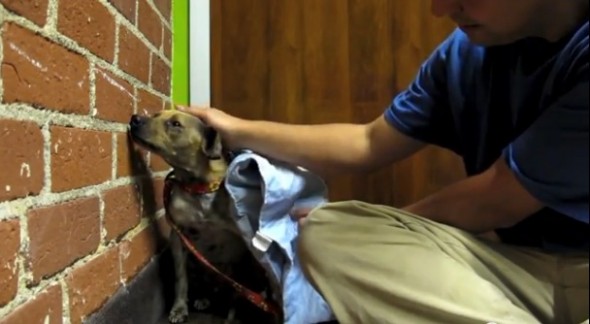 Ralph had been abused and abandoned by his owner and survived by living in trash. Good Samaritans passing by fed him and tried to find ways to save him. Barbara Perrin posted photos of the dog on Eldad’s Facebook page, pleading for help. Of course, Eldad said yes.

He set out a live trap, but the skittish dog was able to back out before it could close. Catching him would be difficult; the dog was terrified.

Eldad enlisted the help of Sigal Shilian, who wanted to volunteer at Hope for Paws, but warned that the dog might bite. She was undeterred. Crouching down, she was able to hand feed the fearful little guy, and they were finally able to coax him into a cage.

Eldad and Sigal brought the dog, who they called Ralph, in to get veterinary treatment. But leashing him proved to be no easy task. Ralph was clearly traumatized, and earning his trust would be an incredible feat.

A blanket was used as a barrier, allowing him to get his aggression out without harming anyone. After a few moments, he warmed up to the blanket, allowing Eldad to gently brush his fur. Though he was traumatized and petrified, it was clear that Ralph was yearning to be loved. It wasn’t before long that Ralph warmed up enough to be pet and bathed.

The next day he was climbing into laps and even sniffing out other dogs. Three months after his rescue, he was adopted by Tina Jackson through the Bill Foundation.

After untold hardships, it seemed that this dog might have been another doomed to live on the streets. But thanks to the patience, dedication and kindness of Eldad Hagar, Ralph is one of the lucky ones to be rehabilitated and find himself a place to call home.