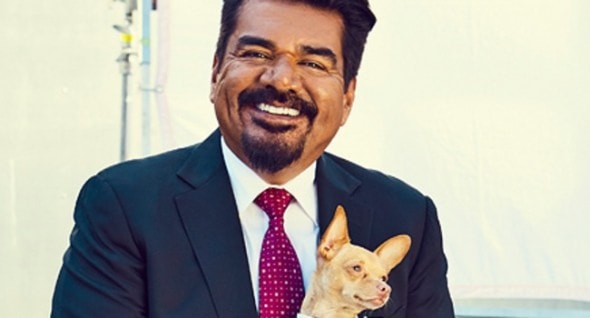 George Lopez was kinda-sorta in the market for a dog when it came time for him to host the World Dog Awards. That’s where he met a 1-year-old Chihuahua named Owen.

Owen had been rescued by Wags and Walks, but no one had given him a permanent home.

“Owen had been turned over a few times,” said Lopez. “People had kind of looked at him and passed on him.”

But Lopez found he had chemistry with the pup immediately.

“He’s quiet for a Chihuahua, which is rare,” says Lopez. “This guy’s all about people and all about connecting. I thought, ‘Wow, what a special dog.’ “

Lopez adds that Owen is definitely a lover, not a fighter.

“He licks a lot,” says Lopez. “He loves people! He’s a master at getting you to pet him.”

One of their favorite things to do together is to watch television while enjoying some dessert. (Those who find people food-feeding abhorrent, stop reading here!)

“I’ll give him some pudding while he’s watching TV,” says Lopez. “He loves that!”

The pair hasn’t done much traveling just het, but Lopez plans on bringing Owen along for his upcoming “Comedy Getdown Tour” with Cedric the Entertainer, Eddie Griffin, D.L. Hughley and Charlie Murphy.

“Eddie Griffin brings his dog Peanut, and I’m supposed to bring Owen so that Peanut and Owen can hang out,” he said.

“They make you do things for them when you don’t want to do things for yourself,” he explained. “In the morning, you’ve got to take them out. He makes me do things like get up and go downstairs, and walk around. It’s so natural that you wouldn’t think that you’re servicing him, and then he’s helping you at the same time.”

He says that Owen’s been great for him overall.

“This business closes you off, and a dog opens you up.”