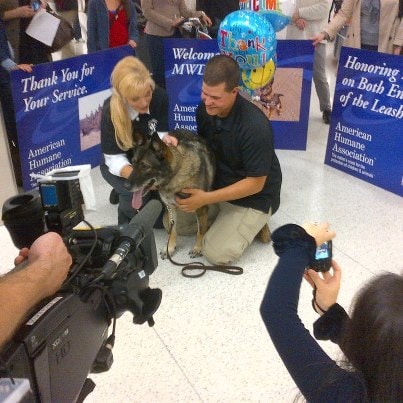 There’s nothing like a reunion of dear friends, especially when they have been through a lot of challenges together.  So, when MA2 Logan McMichael and his dog Fara were reunited yesterday, it was an especially sweet moment.  The pair first met after McMichael joined the navy and was stationed in Greece.  He and Fara, a military working dog, were partnered in 2008 and deployed to Kuwait in 2009.

As in most cases, the handler and his dog became very close but when it came time for McMichael to return to the US in 2010, he was forced to leave Fara behind as she was still on active duty.  Before he left her, McMichael asked to adopt Fara.   Now Fara has been retired and is finally back together with her “dad”, thanks to the efforts of many including Debbie Kandoll of Military Working Dog Adoptions.  “Debbie flew to New York Monday, to Greece Tuesday and should be leaving Crete Wednesday or today,” said McMichael’s mother Roberta Wright on Thursday. “I’ve never been a part of something like this.” 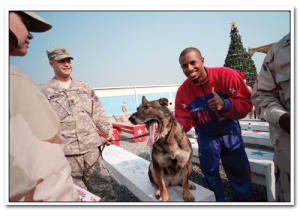 McMichael is a Master of Arms and Military Working Dogs Handler now stationed in Yorktown, Va.  Fara, after a career protecting soldiers as an explosives detection canine, had to take 3 flights to make the long journey home and arrived at Baltimore’s BWI airport to a cheering crowd that included representatives from the American Humane Association and Military Working Dog Adoptions, both of whom worked hard to raise the funds to make it all happen.

“Fara not only kept our son safe while he was deployed, but her entire life has been dedicated to keeping her country safe,” said Wright. “She deserves to be loved for the rest of her days.”

For more information on how to support dogs like MWD Fara, please go to http://www.militaryworkingdogadoptions.com/.

1 thought on “After a long career, MWD Fara is back home where she belongs”