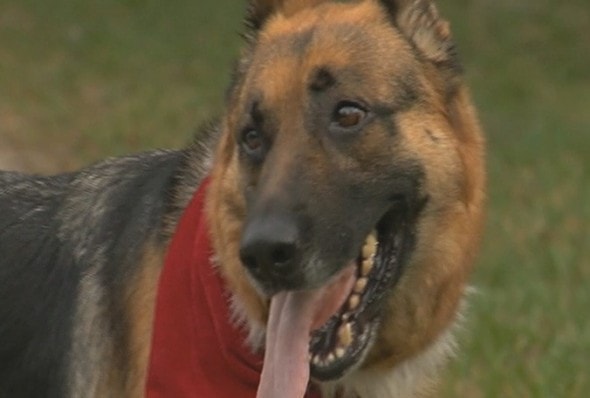 This coming Christmas will be the first one ever in Sasha’s life where she won’t have to worry about suffering any more abuse at the hands a cruel human.  Sasha is in a foster home now, and on her way to making a full recovery.

Sasha’s story came to light only recently.  A neighbor caught video of her former human abusing her terribly.  He and her siblings only knew fear and pain from this monster, and the neighbor was not going to stand for it.  They called the police, and released the video over social media outlets.

The video is almost impossible to watch.

“She was beaten by her previous owner, probably her entire life, and I’m talking about beaten by objects, sticks and pipes and bats,” said Eva Zeihl.  Sasha is currently being fostered at Zeihl’s parent’s home.

Once the video was turned over to authorities, they acted immediately.  Sasha and her siblings were seized, and the person responsible for the abuse was charged and convicted.  A total of three dogs, all suffering horribly, were removed and then sent to the German Shepherd Rescue Group.

Sasha will be spending Christmas inside this year.  In fact, all of the dogs will be a lot more comfortable indoors this time around, instead of their usual “home,” which was taking shelter under a van in the yard.

“I don’t think she ever had a Christmas.  I think this will be her first one,” said Zeihl.  “She never got any love, never had any toys, treats, no affection at all.”

Sasha has plenty of affection now.  She gets plenty of visitors, and we’re sure that under the tree, there will be a few of what very well may be the very first gifts this dog will have ever received.

Sasha is available for adoption, however there are some restrictions.  Sasha cannot be taken out of Florida, and anyone wishing to be considered as a candidate for adding her to the family will face stiff scrutiny from the rescue group before Sasha goes to anyone.

For more information, check out the YouCaring.com page by clicking here.