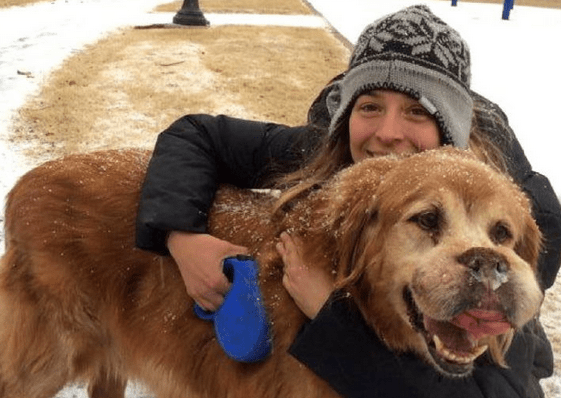 Platty very likely doesn’t have much time left, but he is getting to spend his last days with a lot of love and a home he deserves. The Golden Retriever was rescued as a stray and soon thereafter diagnosed with aggressive cancer in his mouth. He was facing being put down when a volunteer fell in love with him and offered him a home.

On January 30th Platty, a 10-year-old Golden Retriever was brought into the Tulsa Animal Welfare shelter. He had an inoperable cancerous growth in his mouth and the shelter was planning on putting him down because they did not have the funds to cover his medical care, which likely would be extensive.

Alli Elmore, a volunteer at the shelter, couldn’t let that happen. She had fallen in love with Platty and wanted to offer him a home. Shelter officials knew that was the right choice.

“We judged that he would have an amazing quality of life with Alli and her husband, Charles, and that has been the case,” said Jean Letcher, shelter manager.

Platty is not in any pain, but the cancer has metastasized into his lungs. Platty was given about two weeks to survive and Elmore is trying to give him the best life he can have in what time he has left.

Platty’s story has touched thousands, and his Facebook page has well over 11,000 likes. Platty’s Memorial Fund has been set up to help cover his medical expenses and in hopes of helping other animals with special needs.

“We want to leave a legacy to remind people just because a dog is old or not perfect doesn’t mean they’re not full of love,” Platty’s Memorial Fund wrote on their fundraising page.

To make a donation to Platty’s Memorial Fund visit their fundraising page and be sure to follow him and his fight against cancer on Platty’s Journey Facebook Page.