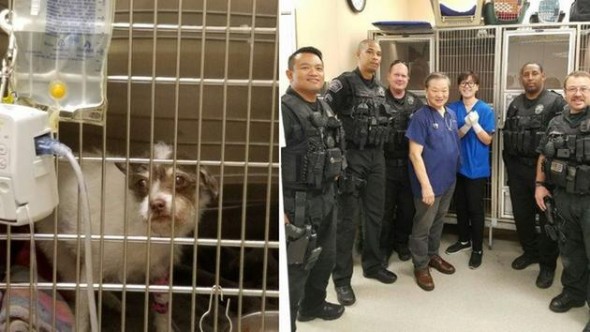 Los Angeles Airport K9 officers are being recognized as heroes after they saved the life of a small dog called Roxy.  Roxy had been struck by a vehicle, and was badly injured.  However, the news is not all bad for the poor little pooch.  Thanks to the airport officers, she is expected to make a full recovery.

LA Airport Officer Havon McLeod had been on his way into work Monday, when he got caught up in a traffic jam.  He couldn’t tell at first why things ground to a halt on the expressway, but he did see people slowing down and changing lanes, almost as if they were avoiding something in the road.

Officer McLeod initially thought there may have been some kind of collision or possibly a breakdown. It wasn’t until he got closer that he could see what all of the commotion was all about.  Someone was on the side of the road in tears, and Roxy was still in the road.  It wasn’t difficult to tell that time was of the essence for Roxy, so Officer McLeod sprang into action at once.

He first went to check on Roxy to ensure she was in fact still alive.  He could see the injured dog wedged under the car, and got to work freeing her straight away.  He and the driver that hit Roxy freed her as quickly as they could, and she was taken to Westchester Veterinarian Center.

At the hospital, staff were able to identify her as Roxy, and the information on the microchip was valid.  Her family was notified by the hospital as to what happened.  Unfortunately, the family does not have the money to be able to afford the necessary surgeries and care that Roxy would need to pull through.  When Officer McLeod called the vet center later that day, he found out that Roxy was to be euthanized.  This was not something that he would stand for.

Officer McLeod got together with the rest of his shift mates and a few other officers, and told them all about Roxy and her situation.  He and five of his other fellow officers pooled together the $400 that the vet center was willing to reduce the fees to, so she could have a shot at recovery.  Thanks to these officers, and especially Officer McLeod, Roxy just might life to see another day!  She has sine undergone her surgeries, and is resting comfortably.