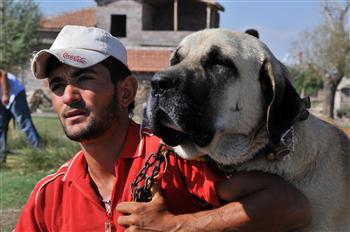 Many museums use security cameras and guards to ensure the safety of the valuables contained inside.  But now museums in Turkey are implementing a new security system – dogs.

Two Aksaray Malaklısı puppies, the largest breed in the area, were sent to a museum in the Central Anatolian province of Karaman.  The idea was inspired after several of these puppies were brought to a fair by the Culture and Tourism Department.  Mustafa Doğan, Aksaray Provincial Culture and Tourism Deputy Director, said the Aksaray Malaklısı are exclusive to the Karaman area.

“They have characteristics of both sheep dogs and guard dogs,” Doğan explained.

A documentary had been created highlighting the dogs’ local origins and their talents.  Culture and Tourism officials thought to incorporate the dogs as part of security systems for museums and ancient sites.

“In this way the idea to use this dog as a guard dog in all museums and historic sites in the country originated.  This application will begin in Karaman,” Doğan said.