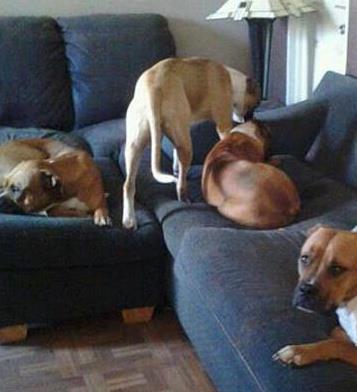 Last December Tim Iocoangeli’s four boxers were euthanized in a situation that outraged many. Now Iocoangeli is continuing to suffer as the county is fining him $15000 that he can’t afford to pay and if he does not pay it by June 14th he will face jail time.

Last April Iocoangeli and his family were not at home when two teenagers opened his front door. One of their boxers bit one of the teenagers. The dogs were taken into custody by the county and the four adult boxers were ordered to be euthanized without any assessment by a certified dog behavior expert. Iocoangeli was remorseful that the girl got bit but angered that the fact that the teenagers were trespassing on his property was ignored. “I am horrified about this,” he said. “But the thing is they’re just looking at the bit thing and not around it. Trespassing. They were never allowed in that house.”

In December all four dogs were euthanized and the county didn’t give Iocoangeli and his family an opportunity to even say goodbye. On top of losing their four dogs the county charged Iocoangeli with four counts of keeping a dangerous dog on his property. The court fined him $15,000. Iocoangeli can’t afford to pay the fine. He was badly injured in a car accident and is unable to work because of his injuries.

Denise Carey-Costa wants to help Iocoangeli and has started a fundraising campaign for what she calls “A huge miscarriage of justice and example of bullying the weak.” Iocoangeli will remain on probation until he pays the fine and if he is unable to pay it by June 14th then he will face jail time. A fundraising page has been set up for Iocoangeli.