On Saturday, Jan. 31, 2015, a woman from St-Ignace-de-Loyola, Que., spotted a dog on top of a thin sheet of ice floating down the St. Lawrence River. The woman and her mother, France Allaire, contacted authorities for help, however no one came to save dog.

Allaire told CBC Canada that when her daughter saw the dog, she rushed home for help. Allaire went out and snapped the photograph of the pet. They then contacted police and were transferred to the Canadian Coast Guard, but neither response team came out to help the pet. 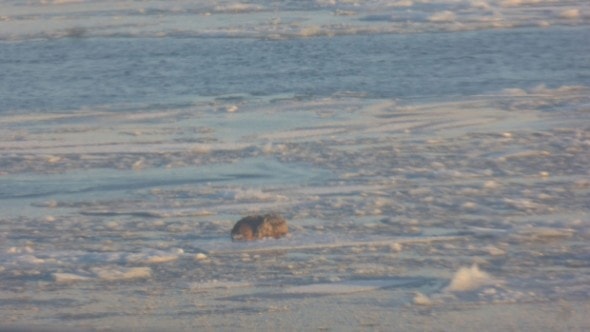 “The iceberg was very tiny, so [the dog] had no room to turn around or walk or anything. So he was just lying there,” said Allaire.

The coast guard only rescues humans and when the women phoned for help, all ships were away clearing ice and controlling floods. Police and firefighters couldn’t come to the dog’s rescue and the local wildlife unit did not intervene either because the animal on the floating ice is not a wildlife animal.

In an effort to get the dog some help Allaire’s daughter posted the photograph on Facebook on a group called ‘Plus Jamais Seul, Mon Chum!’  (Translation: “You’ll never be alone again, my friend”). The women hope the community comes together and does something to save this dog.

An animal organization, Urgences Animales, has offered to help, but they have yet to locate the dog floating on the ice sheet. With the temperatures being in the – 30 C, there is almost no hope the dog survived since Saturday exposed to the elements, but rescuers don’t want to lose hope.