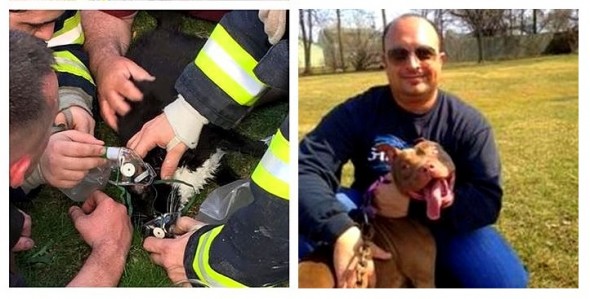 Firefighters working to save one of Misseri’s cats; Misseri & rescued fighting dog Ginja.

Some of you may have heard of Robert Misseri, the founder and President of the New York City-based group Guardians of Rescue – we share a lot of their stories.  His team does amazing work saving the lives of animals in peril, and helping to keep families and their pets together during times of catastrophe.  Disaster recently struck his family in the form of a house fire, and his beloved feral cat Louie perished.  But rather than dwell on his loss, Misseri is using this opportunity to selflessly raise funds to make sure that fire departments are equipped with the special oxygen masks needed to save the lives of dogs and cats who otherwise might not survive a fire. 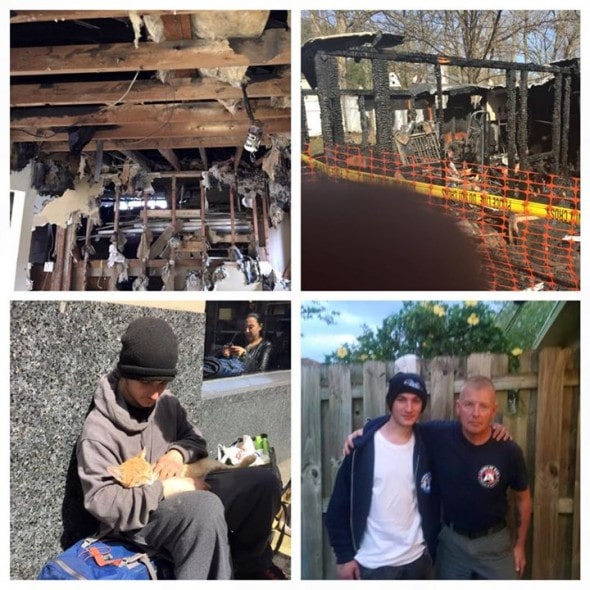 From Guardians of Rescue:

Our president, Robert Misseri, met a homeless 23-year-old also named Robert on the streets of New York City. His home was a side walk.  His best friend in the world was a cat by the name of Butterscotch. Thousands passed him daily on 7th Ave. and 35th St., but not Robert Misseri. He took an interest in his plight. When asked why he was homeless he said, “I have an addiction and can’t get my life together.” Rob Misseri asked where he found the cat, he said, “I was in a real bad neighborhood where I would by my drugs from, I picked him up, and we bonded instantly.”

When Robert would go back to buy his drugs he would always bring a large bag of cat food to feed the others. Misseri told him he would get him and his cat off the street, and he did, last week. With a joint effort between Tatiana Green and our vice president Dori Scofield, founder of Dan’s Foundation for Recovery, he was taken to a detox facility. 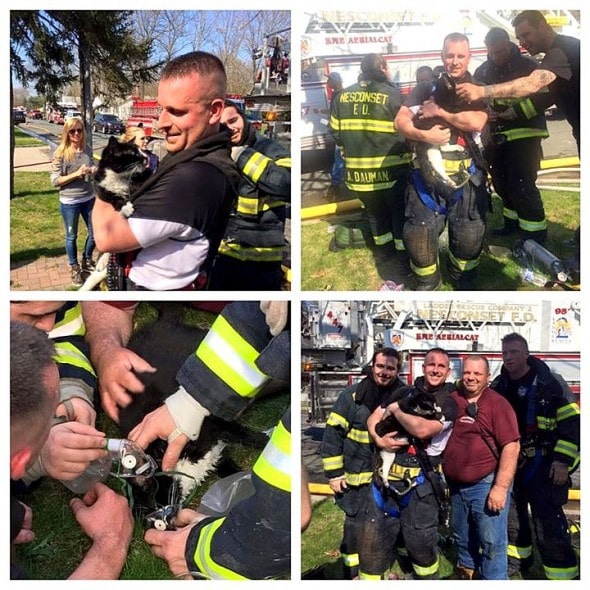 But Saturday morning, Misseri was called, and they discharged young Robert early. He needed to get to the next phase, a treatment center in Florida, but Robert had no ID so boarding a plane was not an option. Misseri left his home to meet Robert, as he knew time was critical to get him into treatment, Misseri called on John Walis, Paws of War and Guardians member, and asked if he can get into his car and drive straight to Florida. John said, “Can you give me 15 minutes to pack a bag?!” As John, Robert and Misseri were going over the travel plans he got the frantic call that his home was on fire.  They all rushed to the scene. At that moment Misseri became homeless just like young Robert.

They both love cats…both have a long road ahead of them. Robert told Misseri no one has ever done so much for him, not to mention a stranger. Misseri told him look around, for he too has never seen so many strangers show him so much compassion as his house was burning!

As of this moment Robert is in a treatment center in Florida and Misseri is homeless living in a hotel with his own animals. Lives cross paths for many reasons.  Let’s pray for both.  We will share more on the other great people who helped Robert get off the street.

P.S. Butterscotch is safe and sound in foster care.

Sadly, our founder/president Robert Misseri and his family lost their home on Saturday afternoon to a house fire….

Misseri should be focusing on putting his life back together, but instead he is trying to help prevent other families from losing their animals to smoke inhalation.  Thousands of pets die every year from fires simply because their fire departments do not have the equipment to save them.